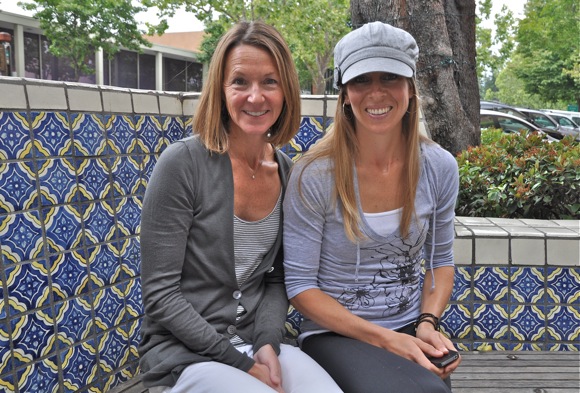 How to give back to the community, make it doable given people’s hectic schedules, and have fun — that was the impetus behind Circle of Friends, founded in 2007 by local residents Molly Gibbons (left) and Ashley Riley.

The group is dedicated to supporting Lucile Packard Children’s Hospital, which is celebrating its 20th anniversary this Sunday, June 26. The “birthday party” will take place from 10:00 am to 4:00 pm on Quarry and Welch Roads in Palo Alto.

Molly and Ashley recalled that when they first got the idea of doing something for the hospital, they went to the Packard Foundation, which helped them get started. They then asked 15 of their friends to join the new Circle, which became the organization’s first Board of Directors.

The membership has grown to 175 people, all women coincidentally. “We don’t exclude men,” said Molly. “The only membership requirement is that each person make a donation to the Children’s Fund once a year. We also encourage people to tour the hospital and come to the annual meeting, which is in October.”

Added Ashley: “Circle of Friends is a good way for people to be connected to Packard — and to interact with a great group of people.”

While the organization hosts two member cocktail parties each year, with the one in December also serving as a toy drive for Packard, their signature event is the Lunch and Learn fundraiser that features a prominent speaker. The event this year attracted over 300 attendees.

“The best part was looking at the audience and knowing only about 10 percent of them,” said Molly. “It was really gratifying to see how much Circle of Friends had grown.”

The two founders say that part of the reason they’ve been successful is that while there are a variety of volunteer activities members can take part in, the time commitment is minimal. “We’ve morphed over time and listened to what people want to do,” said Molly.

More information about joining Circle of Friends is available on the organization’s website.