Get ready for 4th of July activities in Menlo Park 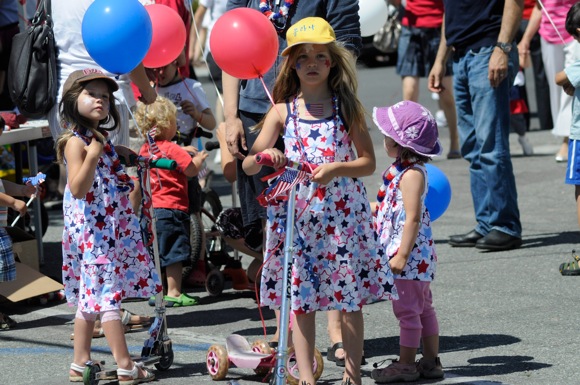 Kids are the stars of the Menlo Park 4th of July parade which starts at 11:45 in the Wells Fargo Bank parking lot and makes its way down Santa Cruz Ave before ending at Burgess Park. Kids should come with their bikes or wagons pre-decorated this year; Menlo’s Community Services Department will be handing out balloons but not flags and streamers as they’ve done in previous years.

Activities follow in Burgess Park until 2:30 pm. There will be bounce houses, giants slides, crafts, face painting and three rock climbing walls. A $6 wristband, which can be purchased at the parade or Burgess, is required to participate in some activities. Musical entertainment will be provided by the House Rockers. 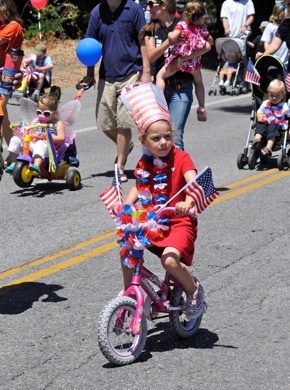 New at Burgess this year, according to Karen Mihalek of the Community Services Department are two food truck vendors. “Eat on Mondays sells a variety of tacos and Tikka Bytes offers nanwiches, samosas and mango lassi,” she said.

Just as the Burgess activities are wrapping up, ragtime music will just be getting underway at the First Baptist Church on Middle Ave., followed by a barbecue. This musical performance is open to everyone and benefits the local U.S.O.

The Menlo Park Police Department reminds the community that all forms of fireworks are prohibited in the City of Menlo Park, including “safe and sane” fireworks. MPPD will respond to reports of the use of fireworks, and may warn, cite or arrest people suspected of using or possessing fireworks.

Locals can see fireworks on Saturday, July 2, following the San Jose Earthquakes game at Stanford Stadium. Tickets are $15-$50. A list of fireworks shows, including those in San Mateo and Santa Clara Counties, is listed here.

Other nearby 4th of July activities

Since 1939, the all-volunteer Peninsula Celebration Association has presented a parade in Redwood City. This year’s theme is Redwood City Fire Department : 150 Years of Service. The parade starts in downtown Redwood City at 10:00 am. A festival featuring musical entertainment, games and food runs from 9:00 am to 5:00 pm.

Gates open for the Woodside Junior Rodeo at 8:00 am. at the Mounted Patrol Grounds, 521 Kings Mountain Road in Woodside. Over 100 young people will be testing their rodeo skills. Entrance fee is $10; six and under are free.

U-pick berry picking will be available at Webb Ranch located off of Alpine Rd. on July 4th as well as Friday through Sunday, July 1-3. Boysenberries, raspberries and blackberries are ready to pick. Entry fee is $3.00 (five and under free) and berries cost $4.50 a pound. The hours are more limited on the 4th, only from 8:30 am to 12:30 pm.