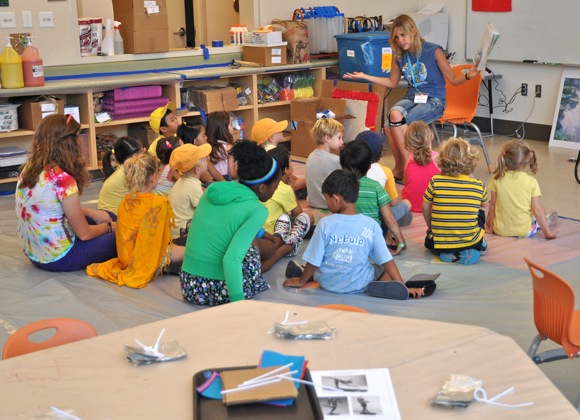 No, Camp Galileo doesn’t literally take campers to the French city of light. Wouldn’t that be nice! But it does a good job of helping Pre-K through fifth graders use their imaginations to think about and create all things Parisian.

When we stopped by the camp, being held this year at Encinal School in Atherton, the weekly learning theme was “Detective in Paris: Impressionism & The Science of Sleuthing.” For the Pre-K/Kindergarten set (top photo) that meant listening to the story of Degas before doing some sculpting of a Degas dancer themselves. (Art activity shown in foreground). 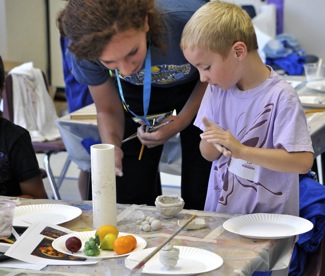 into action by each painting a Serat-inspired Eiffel Tower. Today, they were busy bringing a Cezanne to life by sculpting a bowl of fruit (photo right).

It was the artist Rodin who the third through fifth graders were zeroing in on. They incorporated their learning by sculpting impressive Rodin-inspired clay hands (below right).

In between learning activities there’s time for some traditional camp fun, like the game where you sit in the circle and the person who’s “it” tries to figure out who’s currently leading the group in 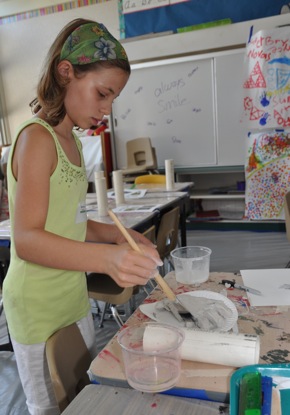 clapping and other hand movements (photo at end of article below). It’s a game that brings out smiles and giggles.

Camp Galileo, with sites all over the Bay Area, is celebrating its 10th anniversary this year. With the exception of 2009 and 2010, Menlo Park and Atherton have hosted camps, initially at Oak Knoll School, then at Selby Lane and Sacred Heart. Each week features a unique art and science theme, with curriculum customized by grade level. Upcoming theme weeks include Inventor’s Workshop, Lost in the Forbidden City, We Built This City and a repeat of Detective in Paris.

Campers spots are available for all grade levels for the remaining camp period through August 5.  The camp hours are 9:00 am to 3:00 pm, Monday-Friday with extended care available. More information about Camp Galileo Atherton is available online. 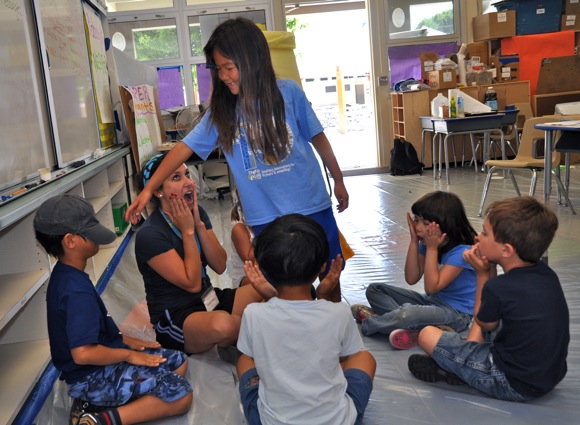