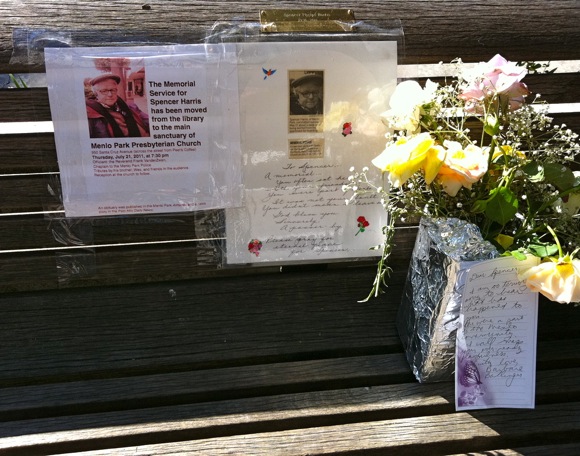 Memorials have recently appeared on the bench outside Peet’s on Santa Cruz Avenue in Menlo Park where for years Spencer Harris enjoyed discussions on a multitude of subjects with fellow Peetniks. Harris was away a couple months ago when the nearby apartment where he had lived for 27 years was entered by police at the request of neighbors concerned for his well-being. The apartment was found to be packed wall to wall with various accumulations presenting a possibly unsafe situation.

Harris, 74, was given a 24-hour eviction notice and forced to sort through his belongings. Less than a week later he drove his car to the Palo Alto Baylands and shot himself. The Mercury News report on this tragic event  includes a balanced discussion of hoarding and mental health. A brass plaque honoring Spencer Harris is now permanently attached to his favorite bench.