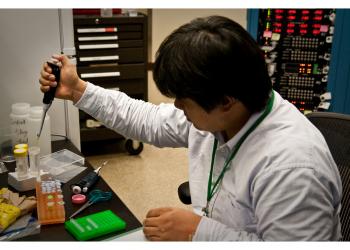 The synchrotron light source community is a large one – about 70 facilities exist around the world – but the men and women who run them are like an extended family. That’s why, when the Photon Factory light source at the Tsukuba campus of KEK, Japan’s national high-energy physics research laboratory, was damaged during the magnitude 9 earthquake of March 11, light sources around the world rushed in with offers of help. Several of the Department of Energy’s national labs are among that number, and this past week SLAC got its chance to step up.

Two groups of Japanese researchers have been ensconced at SLAC’s Stanford Synchrotron Radiation Lightsource since last Friday, using Beamline 4-2 to study proteins in solution, catching what sleep they can, and sneaking peeks at the baseball stats of Bay Area teams during their few free moments. The beamline specializes in small-angle X-ray scattering, a technique in which X-rays are scattered off biological molecules held suspended in solution. SAXS is especially useful for studying aspects of proteins that cannot be seen when the proteins are in crystalline form.

“We’d like to thank Hiro-san for this opportunity,” said Noriyuki Igarashi, a beamline scientist with the Structural Biology Research Center at the Photon Factory who came with his colleague, Nobutaka Shimizu (pictured), to conduct experiments. “Hiro-san” is Hirotsugu Tsuruta, a senior staff scientist at SSRL and one of the leaders of its Structural Molecular Biology division. As Igarashi explained, “When communication came back after the earthquake, we found many, many e-mails from all over the world – including from Hiro-san and Matsui-san” – Tsutomu Matsui, 4-2 beamline scientist – “to offer help.”

Igarashi said getting the Photon Factory back up and running was one of the highest priorities at KEK after the quake. Fifty beamlines attract more than 3,000 users a year from all across southern Asia and Oceania. They include beamlines run by India’s Department of Science and Technology and by the Australian National Beamline Facility. “Our users pushed us,” Igarashi said, “and many colleagues encouraged us, so we started to recover our town and our facility.”

With concerted effort, the Photon Factory’s electron beam began circling the synchrotron’s storage ring again in June, a scant three months after the quake. But a regular schedule of experiments will not resume until September in order to ease stress on Japan’s over-loaded power grid.