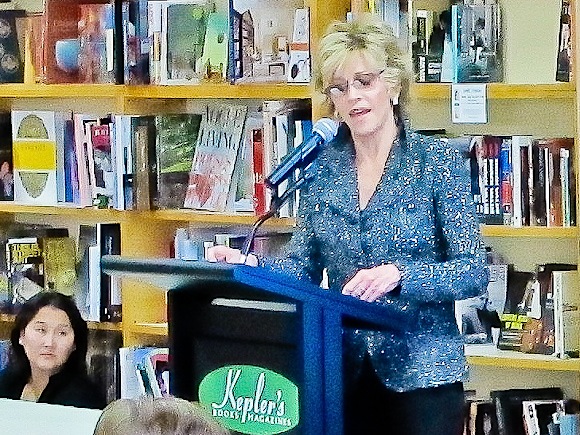 Actress and author Jane Fonda played to a standing room only crowd Thursday night at Kepler’s talking about her new book “Prime Time“. She began with a tip of the hat to Professor Laura Carstensen of the Stanford Center on Longevity who helped her as she researched the aging process in preparation for writing the book.

Fonda’s message was very optimistic,  saying “Suddenly I’m old and much happier than ever.” She noted that Picasso said “It takes a long time to be young,” and she knew exactly what he meant. Noting there are two metaphors for aging — an arch which peaks at midlife versus a staircase that you continue to ascend — she was on that staircase. “It’s the right one!” She noted one big benefit of perspective gained in later years is that you have less ego stake in outcomes — compassionate detachment was her phrase.

In talking about the 11 areas of focus she describes in the book, she highlighted how important it was for her to conduct a life review, thinking back on her life and really examining it, the people in it, what she learned from them, and how they influenced who she became.

No surprise, she emphasized the importance of staying physically active and eating fewer calories of good food. She pointed out recent brain research findings about the plasticity of the brain and how it also adapts to exercise, particularly doing new things. Fonda said she’s about to learn to tap dance as one of her new adventures.

With a smile, she noted that three of the chapters in the book discuss sex, with her favorite chapter being titled “The Lowdown on Getting It Up”. Unfortunately for us attending, she didn’t have time to elaborate!

As she neared the end of her comments, she noted how important mediation had become for her. Instead of working out, she calls it “working in”.

One came away quite struck by the energy and vitality of this 73 year old who captivated the room with her wise words.