Gillian’s ode to watermelon, salad that is 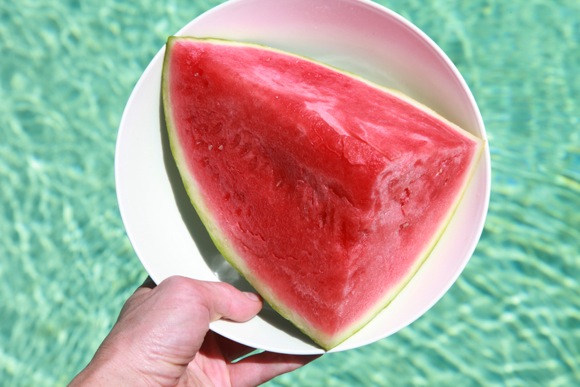 Editor’s note: Atherton resident Gillian Bostock is not only a talented, serious-amateur chef, she’s also an accomplished photographer. This is the seventh in her series of great summer recipes.

Let us, for a moment, consider the watermelon — an enormous round of juicy sweetness locked in a thick green skin. The Chilean poet Pablo Neruda eloquently and playfully called it a “jewel box of water” — “the green whale of summer.” It is, believe it or not, classified as both a fruit and a vegetable. Try that conundrum on for size.

Did you know that King Tut was buried with numerous watermelon seeds? I suppose it’s understandable he would assume the afterlife to be as hot as Egypt and, therefore, what king wouldn’t want watermelons there? Or, what about in Japan? Did you know they have square watermelons? Presumably, this is so the rather cumbersome fruit/vegetable takes up less shelf space and won’t accidentally roll off the kitchen counter onto your big toe.

Growing up, I’ll admit I never pondered the watermelon. It was either a large green ball in a pile of large green balls at the grocery store, an edible pink triangle served at pool parties and barbecues, or a Jolly Rancher flavor. Watermelon didn’t mean much else to me until after college when I had a tall glass of jugo di sandia. After one sip, I declared it to be the most divine thirst-quenching juice I had ever put in my mouth, especially when infused with a touch of mint.

Watermelon salad of the savory variety was an even more recent discovery. and the following recipe is my favorite version yet. The key step is to pickle the jalapeños in champagne vinegar before adding them to the salad — a medley of watermelon, crisp cucumber, cherry tomatoes, and queso fresco. Unlike most other cheeses, the salty and tangy queso fresco keeps its shape and doesn’t disappear into unknown corners of your salad bowl.

This salad goes extremely well with shrimp tacos and a margarita! (Ingredients and recipe follow below the photo of finished results.) 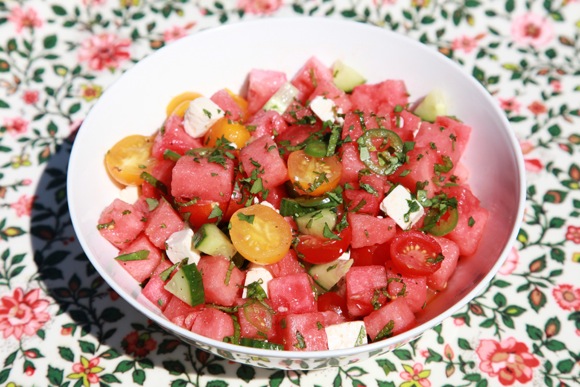 Directions
1. Chop the jalapeño very finely with a sharp knife so that you have thin rings of green. For those of you who like things extra-spicy, use a Serrano pepper instead. Be careful not to touch the pepper with your bare hands, especially if you wear contact lenses since it can be very painful should it get in your eye. (Note: I usually keep my hand inside a plastic bag while I’m chopping hot peppers.)
2. Put the jalapeño slices in a bowl with 2 tablespoons of champagne vinegar and set aside.
3. Cut the watermelon into ½ inch slices and chop off the white area and skin. Cut the watermelon into ½ inch cubes and transfer to a large salad bowl. Add the halved cherry tomatoes.
4. Slice the cucumber into ¼ inch thick rounds. Stack three rounds on top of each other and slice across the diameter three ways so that you have evenly sized triangles. Add to the salad bowl.
5. Chop the queso fresco into ¼ inch cubes. Add to the salad bowl.
6. Stack several mint leaves on top of each other and slice very thinly. Add to the salad bowl.
7. Add olive oil to the pickled jalapeno slices and vinegar. Add a dash of lime juice. Whisk. Pour over the salad and toss.
8. Season with salt and pepper. Sprinkle cilantro on top. Serve immediately.

Do you have an original recipe? We’d welcome the chance to feature it on InMenlo. Send to tips@inmenlo.com.