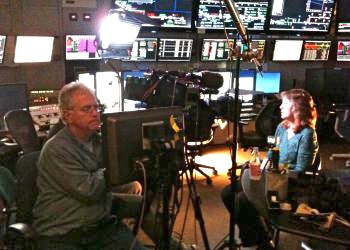 Are parallel universes real? The answer to that intriguing question is explored in an hour-long Discovery Channel television program that features SLAC theoretical physicist JoAnne Hewett and airs nationwide at 8:00 pm Sunday, Sept. 4

The program is the final installment of Discovery Channel’s Curiosity series. It will be rebroadcast later on Science Channel as an episode of Morgan Freeman’s Through the Wormhole series.

Back in April, the film crew taped Hewett discussing the science of parallel universes in SLAC’s Master Control Center and in front of Building 41.

“The main portion of the interview was about BaBar, the B-Factory and taking measurements concerning the antimatter content of the universe,” Hewett said. “We also spent two or three hours filming a scene where I play checkers with myself. The red checkers represented the matter in the universe and the black checkers antimatter. At the end of the game only one red checker was left, to indicate that the universe is now only full of matter.”

Whenever Hewett switched to playing the black checkers, “The inside joke is that they called me ‘Anti-JoAnne, the evil twin,’” she said. “It turns out that my mother is a twin and her sister is my Aunt JoAnne. I couldn’t say the words ‘My evil twin anti-JoAnne’ without laughing! All in all, it was a lot of fun. The TV guys were absolutely great at making me feel comfortable.”

The Discovery Channel website describes the episode this way: “On the surface, the term ‘parallel universe’ seems straightforward, conjuring science-fiction images of inter-dimensional travel and lurking doppelgangers. But parallel universes might not be mere fantasy. Modern science tells us that somewhere out there, in another fabric of time, there could be entire worlds that look very much like our own.”

“The American taxpayers pay for our science,” she said. “Overwhelmingly, I find that the average person I meet on the street or driving a taxi or sitting next to me on an airplane is incredibly interested in our science and think it’s important. But they need for us to talk to them and tell them about it.”