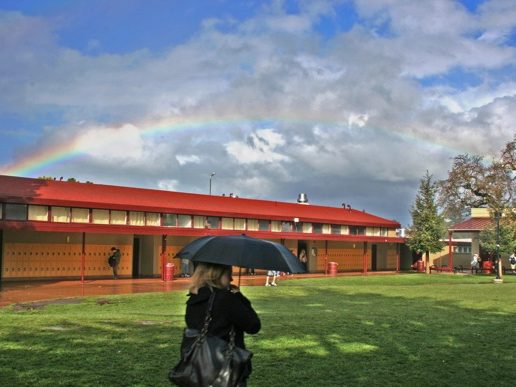 Editor’s note: This coming weekend the Menlo-Atherton High School class of 1961 will be holding 50th reunion activities. Last weekend, it was the 55th reunion of the class of 1956. Oakland Tribune columnist Dave Newhouse, a member of that class, emailed InMenlo some observations:

“It was a smashing reunion — 70-plus attendees, including class of ’56 alums and spouses/guests. Classmates George Carr, Duane Starnes and Joe Parodi cooked enough food for 150 people, so folks took plenty home. Nils and Marie Runsvick, who met at M-A, brought oldies music and life size cardboard cutouts of Marilyn Monroe, John Wayne and Dale Evans. We all mixed so easily, and I truly felt the closeness of our class.

“Doug Murray, an English and journalism teacher when we were in school and later M-A’s principal, came to the reunion and spoke. His daughter drove him from his home in a Santa Rosa retirement community. He’s now 91, and soft of voice, but even without a microphone he told us we were a special class in terms of achievement in scholarship, athletics, community involvement and leadership. He told me earlier that we were his favorite all-time graduating class for those very same reasons.

“At a 55th reunion, things begin to disappear such as classmates. But so does such materialist things as fancy homes and fancy cars. At this stage of our lives, we’re just happy to be alive and, hopefully, kicking. And what’s the old saying: ‘The best friends are old friends. They know who you are, and they know where you’ve been.’ People came from as far away as Florida for this 55th reunion at the Redwood City Yacht Club, and we talked about having a 60th reunion.”

Some pre-reunion thoughts from Dave, including the death of a homecoming queen.