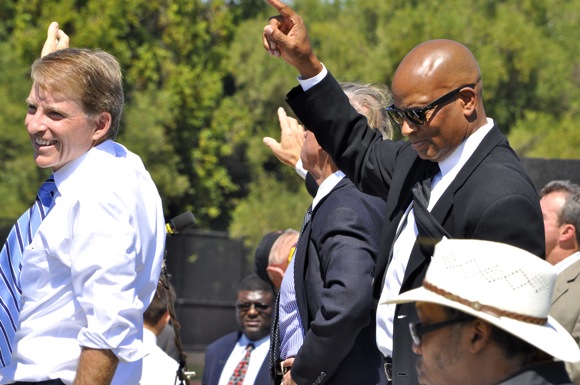 One by one they took the podium to pay tribute to a man so beloved, that even the most gifted speakers among them ran out of superlatives. Menlo-Atherton High School’s legendary Coach Ben Parks was eulogized today as teacher, mentor, disciplinarian, wounded defender, friend, family man, confident and counselor.

“Who didn’t fall in love with Coach Parks,” said MC Jan Hutchinson. “He helped me love myself when I had doubts that I was loveable.” 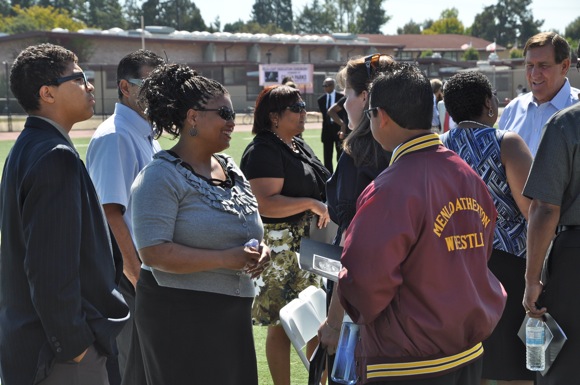 The two-hour memorial tribute, attended by the Coach’s adult children and grandchildren (above greeting participants), took place appropriately on the football field that bears his name. Players from throughout his 32 years at M-A came to pay respects, many reuniting for the first time in decades.

While almost every speaker’s words brought tears, there was also laughter and joy. Lawrence Brice, representing Edison High where Coach Parks spent three years before coming to M-A, got down on the platform to do a series of push ups, to the delight of the many representatives in the audience who played for Coach Parks. 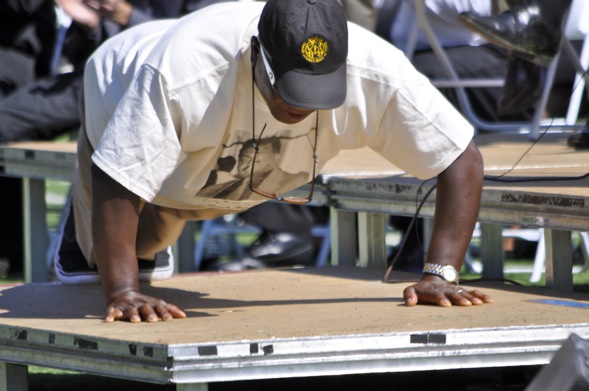 NFL Pro Football Hall of Famer Ronnie Lott (top photo, right) who trained with Coach Park as member of fitness group, the Wild Bunch, reminded the audience of the Coach’s love for his wife and family, “Man, if we could love like that man loved, we could exhaust that muscle,” he said.

Grant Anderson, who played for Coach Parks the first year he was at M-A (1968) 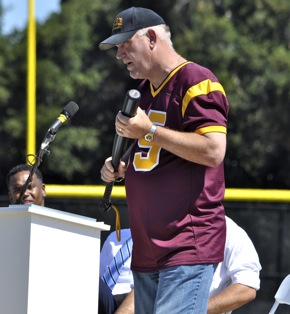 picked up the Coach’s famous black baseball bat and talked about his vivid memories of Coach storming the halls of M-A. Class of ’73 member Barry Hyde lead a Coach Parks cheer and reminded those assembled of one of the Coach’s famous one liners: “Fatigue makes cowards of us all.”

Steve Westly, (top photo, right) class of 1974, talked about how M-A was a tough place to be in those years, but thanks to Coach Park’s influence, calm prevailed over strife in most cases. “I didn’t play football or have Coach Parks for P.E.,” said Westly. “But 32 years after I graduated when I was running for governor, it was Coach Parks who was one of the first to urge me on. He didn’t just know the names of athletes, he got to know all of our names.”

The reminiscences were given with passion and warmth, often in the loud, gruff voice of the Coach himself. It was as if all present were channeling his spirit: “Get stronger. Never give up. And stick.”

Current Sequoia High School student and wrestler, Matteo Procedda, a member of Coach Parks’ last team, summed it up succinctly: “He loved us all in his own way.”