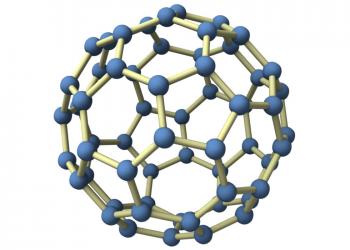 Editor’s note: We are always informed and occasionally amused by SLAC Today‘s word of the week and couldn’t resist today’s offering – buckyball – as the baseball playoffs begin.

The diminutive of buckminsterfullerene, a buckyball is a spherical molecule of carbon atoms. First observed in 1985 by a team at Rice University, which subsequently won the 1996 Nobel Prize in Chemistry for discovering the fullerene class of molecules, buckyballs were named after Richard Buckminster Fuller’s soccer-ball-shaped geodesic domes.

Buckyballs, the largest form of matter to exhibit wave-particle duality, have proven to be an important discovery in the advancement of nanotechnology. The molecule’s complex structure of 20 hexagons and 12 pentagons holds together in such a way that one unbonded electron on each of its 60 carbon atoms can float around all of the compound’s atoms. This property, in addition to the buckyball’s size and structural strength in quantity, has paved the way for development of a number of nanostructures never before possible.

Since their discovery, buckyballs have been found to occur naturally, and in 2010, their unique infrared signature was detected in a cloud of cosmic dust surrounding a star 6,500 light years from Earth.