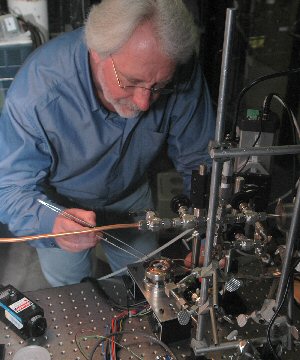 Cold fusion was hot about 20 years ago, and then it faded almost into oblivion after being discredited as unrealistic. Today, it may be time to re-evaluate its potential.

On March 23, 1989, two scientists in Salt Lake City, Utah, Martin Fleischmann and Stanley Pons, presented evidence of nuclear-level heat production from an electrochemical process. This was an outcome that was until then unimaginable and entirely unexpected. Simultaneously (and apparently independently) Steven Jones, also from Utah, announced his discovery of the neutron production from an electrochemical process, also entirely unexpectedly.

These announcements were greeted with great hope. Skepticism and accusations of deception followed, however, as replication of the processes proved difficult.

A group of SRI scientists has been studying this phenomenon continuously for more than 22 years. At Café Scientifique on Oct. 11, Michael McKubre, Ph.D (pictured) will report on the state of the field, reasons to have hope and confidence in cold fusion as a potentially unlimited energy source, and the basis for continuing skepticism.

McKubre is an internationally recognized expert in electrochemical kinetics. He is a pioneer in the use of AC circuit impedance methods for the evaluation of electrode kinetic processes. He also introduced harmonic impedance spectroscopy as a tool to measure rates and mechanisms of electrochemical reactions. These techniques are widely applied in the fields of battery science, fuel cells, corrosion, electrochemical sensors, and hydrogen production and storage.

In 1978, McKubre joined SRI as an electrochemist; in 1982, he was appointed manager of the Electrochemistry Program. At SRI, he has driven the discovery and application of potential new energy sources, specifically those associated with the deuterium/palladium system. He is recognized internationally as an expert in palladium-hydrogen and palladium-deuterium electrochemistry and calorimetry.

Café Scientifique events are open to all, free of charge. Doors open at 5:15 pm, the program runs from 6:00 to 7:30 pm. SRI is located at Middlefield Rd. at Ringwood in Menlo Park.