Guardian bear statue to be unveiled at M-A 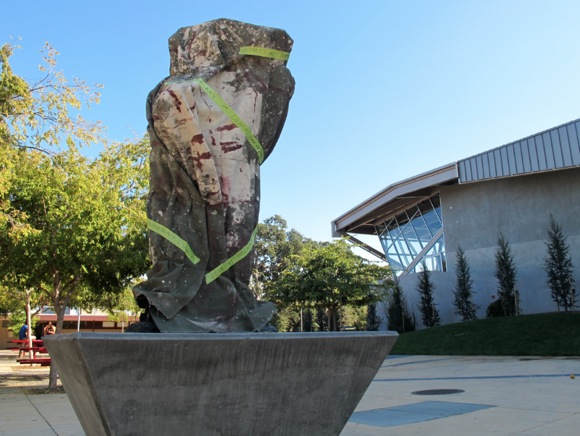 The M-A campus will unveil its latest renovation today (Wednesday, Oct. 19), a 6’6″, 500-pound bronze bear statue that will grace the patio between the PAC and the library.

The statue, originally purchased online by M-A parent John McMurtry, was shipped all the way from Thailand. “Ever since the PAC was finished, I thought that the [patio] just cried out for a bear statue,” says McMurtry.

After pooling funds from the leadership program through Andy Stuart, the Alumni Association through Chris Rubin, Matthew Zito’s Principal’s Fund supplied by the PTA, and $5000 from the class of 2010, McMurtry made up the difference.

Though the bear statue made an appearance on the campus for a few days last year, McMurtry says that because it was too much trouble keep secure, he decided to “hide it away until everything else was ready.”
As a mechanical engineer, McMurtry then decided to take on the task of installing the massive bronze statue with the help of plant manager Brian Oliver’s forklift and our own woodshop teacher Mark Leeper.

“The first thing I had to do was to fix a big metal plate in the bottom [of the statue] to use to mount the bear,” McMurtry describes. He then designed the base to look like the concrete benches surrounding PAC, and with the help of Leeper and his students, it was finally finished just a few weeks ago.

Whether a symbol of school spirit or the target of future senior pranks, thanks to all of its benefactors the bear statue will be an important landmark of the M-A campus for years to come.