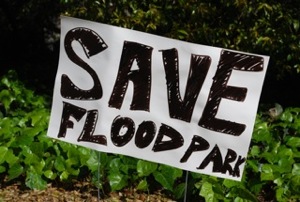 After being shuttered for 13 months to facilitate San Francisco Public Utilities Commission (SFPUC) upgrades to its water supply pipelines, Flood County Park will re-open on November 12, 2011 at Noon with a ribbon-cutting ceremony and celebration event co-hosted by the Friends of Flood Park and the San Mateo County Parks Department. A ribbon cutting ceremony led by San Mateo County Supervisor Rose Jacobs Gibson will be followed by Friends of Flood Parkʼs “Party in the Park” celebration with gourmet food trucks, live music and a kidʼs scavenger hunt.

In advance of the Park re-opening, there will be a couple of final clean up efforts. This Saturday, Nov. 5, Friends of Flood Park is partnering with the grassroots group, Save Flood Park, from 9:00 am to 1:00 pm. People interested in joining the effort should email info@savefloodpark.org. There will also be a clean up from 9:00 to 11:00 am on the re-opening day.

San Mateo County Board of Supervisors announced last spring that the Park would remain closed indefinitely due to county budget troubles after the pipeline repairs near Flood Park were completed this fall. However, the Supervisors reversed course last summer after an outpouring of community support for Flood Park. The park is now slated to remain open from November 12 until June 30, 2012.

The possibility of closing Flood Park again after June 30 remains a concern to park neighbors, city residents and the new park supporting organization, Friends of Flood Park. The San Mateo County Board of Supervisors and County staff have considered several options to address the long-term status of the Park. The County Manager and staff have approached the City of Menlo Park to determine if the City is interested in assuming management of the property. The County continues to explore sources of funding that could be used to maintain the operation of the Park on an ongoing basis.