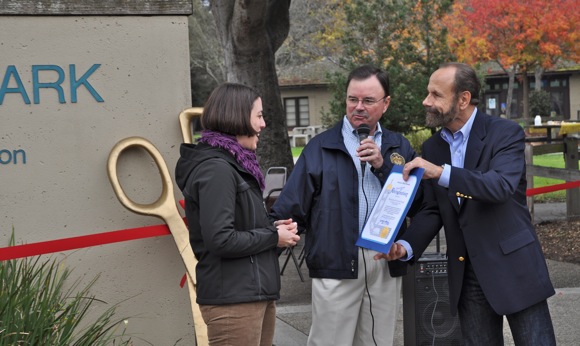 Two California Assemblymen and one very committed volunteer were among those on hand at noon today to formally re-open Flood Park, which has been shuttered for the past 13 months. The local Assemblymen — Rich Gordon and Jerry Hill — presented Friends of Flood Park president and Menlo Park resident Kristen Cox with a proclamation of thanks for her and other Friends’ efforts in working with the County of San Mateo to help ensure the Park’s future. 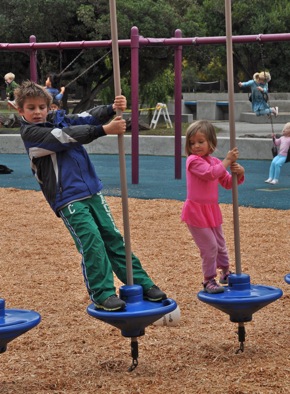 Gordon provided some historical perspective on the Park, telling the assembled crowd of Park enthusiasts that Flood was the second park in the County’s park system, one that was built by WPA workers during the 1930s.

“When it first opened, it had a swimming pool,” he said, noting that the pool closed during the 1970s. “But I remember it well because I learned to swim here!”

Gordon concluded  by saying that today could mark the turning point for the “jewel of the county’s parks” and set the “next stage in the history of Flood Park.”

In addition to the ribbon cutting ceremony, there were three food trucks available for people to buy lunch and a scavenger hunt for the kids, most of whom quickly found their way to the newly-cleaned playground equipment, thanks to the Friends of Flood Park. On hand to provide the entertainment was the Mariachi Cardenal de Stanford, many of whom said they were planning to shed their band uniforms in time to attend today’s big game against Oregon. 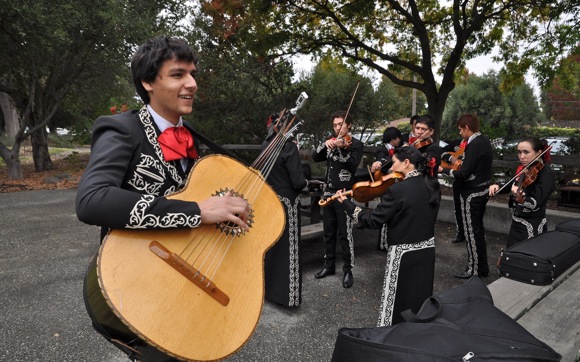 San Mateo County has made budget adjustments to provide funding for Flood Park through June 30, 2012. During those six months, Friends of Flood Park hopes to raise $250,000 from the local community to cover the remaining Park maintenance costs for the rest of the year. The Friends’ long term plan is to create an endowment to provide ongoing support for the Park with the intention of preventing future Park closures. Donations can be sent to: Silicon Valley Community Foundation, Friends of Flood Park Fund, Attention: Gifts Administration, 2440 West El Camino Real, Suite 300, Mountain View, CA 94040.