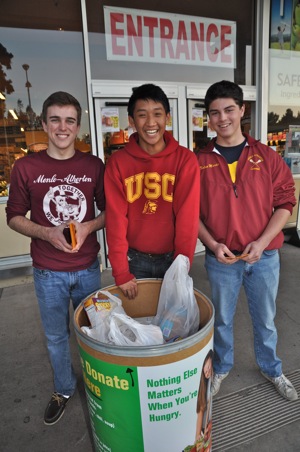 “Our goal this year is 77,000 items because Coach Parks just passed away and he was 77,” said Tyler Finn, who’d signed up with two friends, Stephen Chu and Nolan Martin (pictured left to right).

The three said that the holiday food drive is one of the most popular activities at M-A, with volunteer slots filling up almost as soon as the sign up sheet goes out.

Between now and Monday, Dec. 5, students will be collecting non-perishable food outside various local supermarkets, including Trader Joes and Draegers in Menlo Park (in addition to the Sharon Heights Safeway) and Whole Foods (Palo Alto and Redwood City), Bianchini’s in Ladera, Roberts in Woodside, and Key Market in Marsh Manor.

Coach Parks started the M-A food drive in 1999, collecting 5000 cans. Last year it feed over 550 families. Distribution is made through Second Harvest and Ecumenical Hunger.