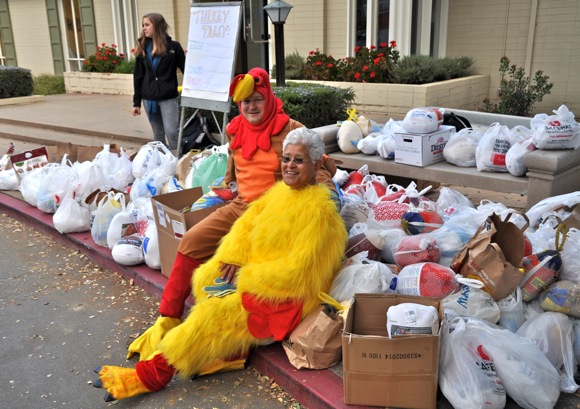 They started arriving shortly after 7:00 am and continued until even after the first bell at 7:50. Call it the “parade of the turkeys” cheered on by one dressed up, human-sized turkey and a dazzling yellow chicken (James Everett and Emily Corpos), all part of a turkey drive staged at Sacred Heart Prep this morning in competition with San Jose’s Presentation High, which holds its collection next Tuesday. 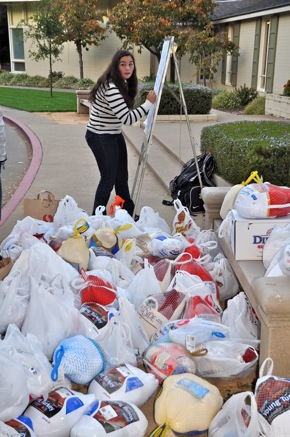 “This is the second year we’ve done it with Presentation,” said Emily Corpos, who is SHP’s co-director of the Office of Service Learning. “We collected 225 last year with minimal lead time, so know we can exceed that.”

The competition was the brainchild of SHP principal James Everett and Presentation High teacher Charles Schmuck. “James has told us that if SHP loses he will serve ice cream sundaes to Pres students, and we have countered with donuts for all SHP kids, so it should be fun,” said Charles, who lives in Menlo Park. (Update: Pres won the competition so Everett will be making sundaes at the school in 2012.)

In addition to the inter-school contest, the Freshman, Sophomore, Junior and Senior classes at SHP were also competing to see which would win the class challenge, with a running tally being taken by  a member of the Civic Leadership Council.