Spotted: Eye candy as homage to one sweet machine 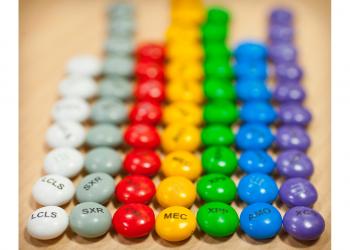 The Linac Coherent Light Source is one sweet machine, and the instrument scientists working at the six experimental hutches are so enthusiastic about it that they’re willing to put their M&Ms where their mouths are – literally.

The colorful candy caper began when Bill Schlotter, instrument scientist with the Soft X-Ray hutch, congratulated Aymeric Robert, his counterpart at the X-ray Correlation Spectroscopy hutch, on first light at the XCS with a little gift: personalized M&Ms, printed on one side with XCS, the other with the iconic lower-case Courier “m,” and colored purple to match the XCS control room and supplies.

Robert knew a good thing when he saw it, and spread the idea. Soon, all the control rooms had custom, color-coded candy, with even a few LCLS M&Ms in an all-encompassing white to round out the prismatic effect.

Schlotter had no idea he was becoming the Munchie Muse of LCLS. As the second instrument to be commissioned, Schlotter’s SXR had the benefit of newness and general LCLS excitement, and he remembers the fuss. He’s not sure the later instruments are so lucky.

“Like a family that has more and more kids, the first and second are pretty special,” he said. “I just wanted to make sure the XCS folks felt like their first beam was a big deal, too, because it was.”