Late Fall’s the perfect time for an apple crisp

by Rachel Candelaria on December 2, 2011 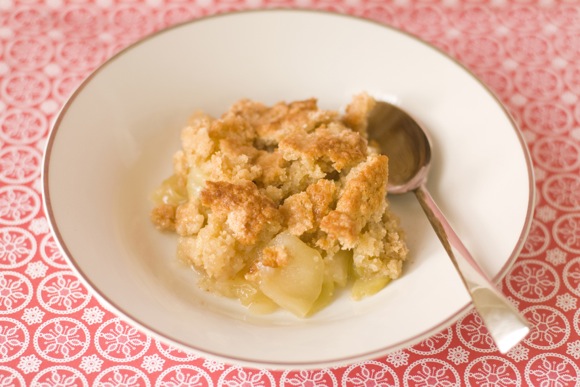 Editor’s note: Rachel Candelaria has long had an interest in food and photography, showcased on her blog, Not Just Sweets, which she describes “as a chronicle of my culinary adventures in the kitchen”. She’s given InMenlo permission to highlight some of her musings and photos from time to time.

My friend and former co-worker, Heidi, comes from a family of farmers. I knew that when she brought in an olallieberry crisp for breakfast on her first day of work that we would be fast friends. Heidi was kind enough to share her family recipe for the crisp, which can be used for all sorts of fruits. I love making it with mixed berries during the summer but I’ve also used it for peaches and apricots.

This is my adaptation of her recipe. With apples plentiful in the market, I used a two pound mix of Pink Lady and Granny Smith — cored, peeled, and sliced.

Topping: Put flour, sugar, baking powder, salt, and cinnamon in medium mixing bowl and stir together. Make a well in the center of the dry ingredients and add beaten egg and stir in mixture with a fork. Mixture should be crumbly.

Filling: Put the fruit in a large bowl. Stir in the flour and sugar; add the fruit and lightly toss the fruit to coat. Spoon coated fruit into an 8 by 8-inch baking dish and sprinkle the crisp mixture on top. Drizzle the melted butter evenly over the crisp mixture. Bake approximately 40 minutes or until top is golden brown.

*If you are using very tart fruit, like blackberries or olallieberries, increase the sugar in the fruit filling to 3/4 cup.