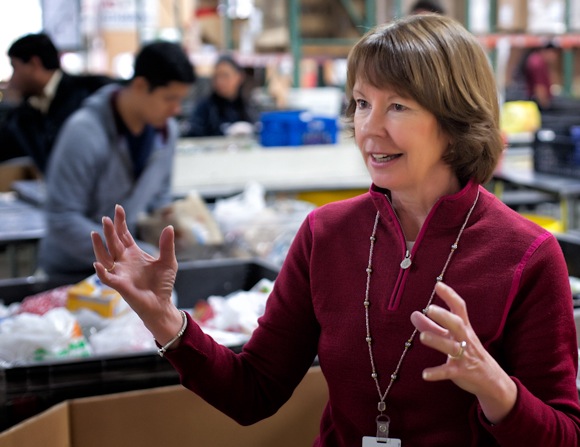 Given Atherton resident Kathy Jackson’s professional background — a series of senior executive positions with a variety of financial institutions — it may be a bit surprising that she’s now CEO of the Second Harvest Food Bank of San Mateo and Santa Clara Counties. But during a break she took from the working world, she became very involved with M-A’s Foundation for the Future.

“I thought I’d retired early,” she said recently during a conversation held at Second Harvest’s San Carlos office. “One reason was that I had two teenage children that I never saw during the daylight during the week.

“Not working allowed me to get involved with the Foundation for the Future and eventually serving as Board president for two years. It was a chance to test out what I learned about management in the private sector in the nonprofit world. Managing volunteers is different than managing employees.” 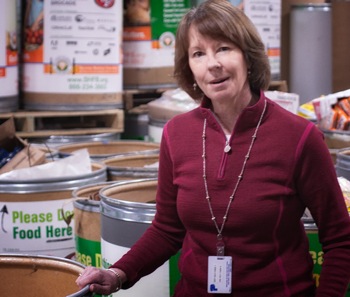 After four years out of the work place, Kathy felt a yen to jump back in and heard that Second Harvest was looking for a CEO. “I knew nothing about supply chain distribution,” she recalled. “But I was lucky. The Second Harvest Board concluded that they could ‘teach food bank’ but not leadership and communication. So I got the job.”

That was in 2009. Kathy and the Second Harvest staff’s aspiration is to have Second Harvest become known as a nutrition bank, not a just food bank. “People are often surprised that almost 50% of the food we distribute is fresh fruit and vegetables,” she said. “That complicates our distribution, but we’ve been able to forge partnerships with growers in the Central Valley. What doesn’t meet the pristine standards of grocery store produce, comes to us. We cover packaging and transportation.”

Call for food donations at this time of the year

At this time of the year, it’s easy to spot one of the 5,000 Second Harvest barrels scattered up and down the two counties for food collection. “About 11 months out of the year, we prefer monetary donations,” she said. “We have the relationships with growers and distributors, so can turn $1.00 into $4.00 of food for healthy meals.

“But at this time of year, we really value the food we get in the barrels. It’s a simple way for everybody to participate and help make a difference. Almost everyone can drop a can of soup or similar item in a barrel. The size of the gift is not as important as the fact of the gift.

“We are one of only a handful of food banks that does not charge anything for the food we distribute. Yet we manage to provide food for 1 in 10 people in the two counties through more than 300 local community-based organizations.”