Is Menlo Park shrinking or expanding? USGS documentary tells all 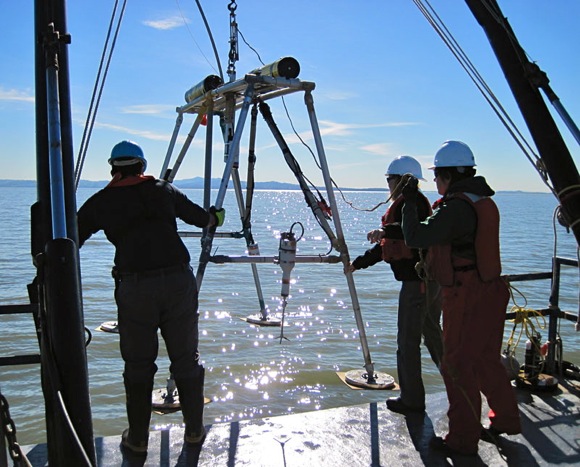 Menlo Park’s eastern boundary is in the middle of San Francisco Bay, a dynamic estuary where seawater entering through the Golden Gate mixes with freshwater from the San Joaquin and Sacramento Rivers and numerous local streams. Fringing the Bay are tidal marshes that play an important role in bay ecosystems.

But is Menlo shrinking or expanding? A documentary produced by the Menlo Park-based U.S. Geological Survey, Turbid Bay: Sediment in Motion , describes ongoing research into the transport of sediment at the margins of San Francisco Bay.

The film, which can be viewed online, follows USGS Mendenhall Research Fellow Lissa MacVean and her USGS advisor Jessie Lacy, as they gather information for a study that provides an important piece of a large ecosystem puzzle. The study begins to address the question of how sediment is supplied to marshes by looking in detail at the reasons Bay sediment moves from areas that are always inundated, or subtidal, into intertidal mudflats that are alternately wet and dry.

“Some wetlands-restoration projects actually deposit sediment to bring the marsh plain elevation up to the appropriate level for plants,” said Lacy, a research oceanographer. “But it’s considered a much better option to rely on natural processes because that is a sustainable restoration. And relying on natural processes means assuming that the turbid waters of the Bay will deposit enough sediment in the marsh to restore it.”

These transport processes are critical to the mudflats and marshes that ringed the Bay historically. More than 80 percent of the tidal marshes that existed before the 1850s and the Gold Rush have been lost because of human activities, which include diking, draining, and filling.

The USGS provides science support to many of the local, state, and Federal efforts to improve the health of the Bay by restoring tens of thousands of acres of commercial salt ponds, diked agricultural acreage, and other lands to functioning tidal marsh and shallow ponds.