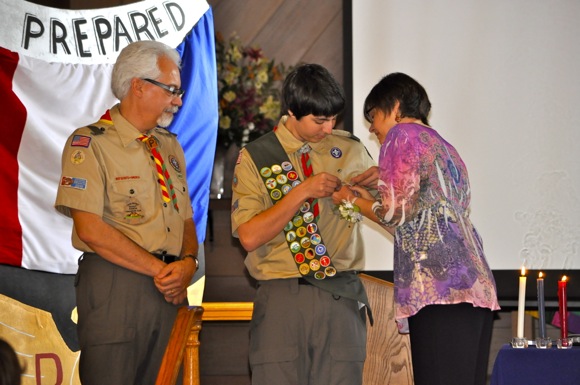 When Dave Baran and Glenn Bugos presented Vincent DeZutti his Eagle Scout Award today — pinned on by his mother with his father looking on — the Court of Honor ceremony marked a continuation in the 57 year history of Boy Scout Troop 206.

First chartered by the Encinal PTA in Atherton in 1955 — and later co-chartered by the Atherton Police Athletic League — the Troop had grown so much by the 70s that it was split in two. Notes Troop historian Emma Shelton: “At that time, one Troop and its Patrols had emerald piping on their red neckerchiefs and the other had gold piping.  Sometime later, the two Troops were reunited, but the Emerald and Gold neckerchiefs were retained and Patrols were assigned to one division or the other. Leadership (boy and adult) neckerchiefs used both emerald and gold piping.”

In the 1990s, Trinity Church in Menlo Park became the single chartering organization, and it was on the church’s campus that today’s ceremony took place. Vincent joined Troop 206 in 2005 and has earned 32 merit badges. He has steadily moved up the leadership rank, becoming a Senior Patrol Leader in 2010. That same year he won the Angus Leadership Award, which honors Scouts who demonstrate outstanding youth leadership in the Troop and is named after George Angus, a long time Trinity parishioner active in Peninsula Scouting. 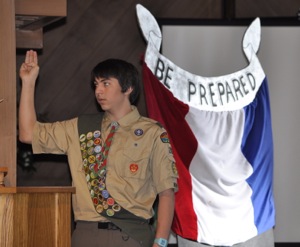 “I’d been a Cub Scout and always liked going camping and hiking,” replied Vincent when asked why he became a Scout. “I have friends at school but none of them are interested in those outdoor activities. Being a Scout gives me the opportunity to be outdoors with other people.”

In his time with Troop 206, Vincent has camped 142 nights and backpacked 579 miles. He’s completed three Troop Treks — Marble Mountain, Lost Coast and Yosemite. The most challenging outing was an 80-mile backpack at the Philmont Scout Ranch in 2010.

About all his merit badges, Vincent said they vary widely in difficulty. “Some are tailored to introduce you to potential careers. Some are required to become an Eagle. The hardest ones are personal fitness, family life, and personal management. They take three months and require you to keep charts about fitness level, chores done for your family, and managing finances.”

Vincent’s Eagle Scout project was designing, building and installing a bench at his church. “I installed it on a park strip so that it would be a place for both church members and the broader community to sit.”

In addition to his Scouting achievements, Vincent has competed in the National and World Yo Yo Championships. He’s also a member of the first robotics team at Sacred Heart Prep in Atherton, where he is a senior. He’d like to pursue media studies at college next year.