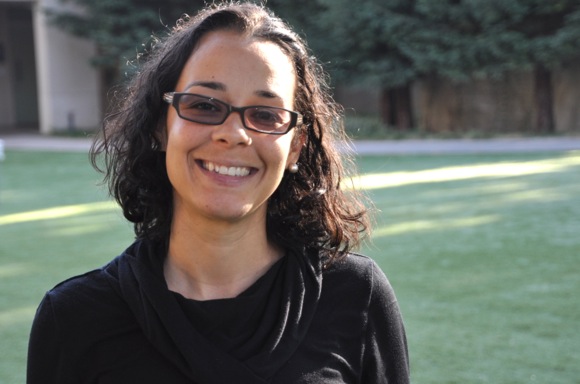 When the Freedom Train stops this morning at San Mateo on its way from San Jose to San Francisco — part of the Martin Luther King, Jr. Day celebration — Menlo School teacher Jessie Thomas Brugos will step off and make some remarks.

“To prepare, I thought about Dr. King’s words that resonant to me as a teacher,” said Jessie, who’s been awarded this year’s Dorothy Boyajian Honored Teacher Award, along with Kathy Connolly of Beechwood School, as part of San Mateo County’s MLK celebration. “I ended up taking some passages from his Nobel Peace Prize speech. I like its theme of hope.”

An alum of Menlo School, Jessie returned to her alma mater in 2002 as an English teacher. Since that time, she’s spearheaded the growth of the Service Learning Program, urging that service needs to part of all students’ lives. She teaches a seminar in Service, as well as two English classes, Society and the Self and The Black Diaspora.

“My goal for students is that they not only understand social inequities but are also empowered to be agents of change,” she said. “We examine what service is and what they feel moved to do.”

Jessie says couldn’t be who she is without the influence of the Civil Rights Movement. “My Mom is black and my Dad is white,” she said. “My Dad marched with Dr. King. He died when I was three, but I’ve seen photos of him as an activist.

“Living in the South, my grandparents on my mother’s side had few occupational choices. They were thrilled to make it through high school. Education was number one with them.”

Service was part of Jessie’s college experience; she minored at Tufts in Peace and Justice. “My focus was on inequities in public education,” she says.

“That today I can teach and also direct community service speaks to a very important part of me. I love those moments when I can incorporate the importance of service into my English classes. It’s fulfilling to help create a culture in which kids genuinely want to give back.”