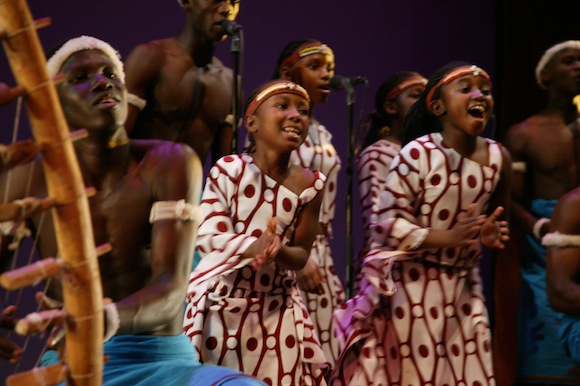 The performers travel a long distance to get here, but when Spirit of Uganda returns to the stage at the Menlo-Atherton Performing Arts Center on Sunday, Jan. 29, they’ll be welcomed by many local residents who’ve gotten involved with the troupe over the years.

“I first saw Spirit of Uganda 10 years ago at Stanford,” says Menlo Park resident Elizabeth Ouren. “Then before their 2006 visit, I heard from a friend that parents from Key School, where the group has visited for many years, brought and shared a meal with the children/teenagers at Hidden Villa, where they stay while in town.

“Two years later, the same friend contacted me and asked if I’d be willing to organize a meal team. I went with a group of families from Menlo Park to Hidden Villa during their visit in 2008. We had such a wonderful time eating and visiting with the kids as well as getting to hear their personal life stories. 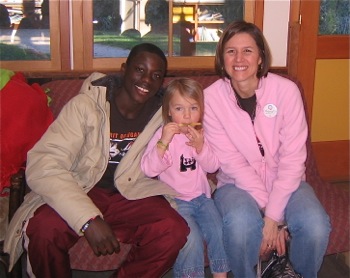 “I was so impressed that despite their challenging circumstances, they all had wonderful dreams and goals for the future of being teachers, doctors, musicians, etc. They invited us to come back a few days later and play games and visit some more.” (Elizabeth is pictured with her daughter and a member of the troupe during the 2008 visit.)

Spirit of Uganda performers range in age from 11 to 22. The group is a program within Empower African Children, whose mission is to transform the lives of orphaned and vulnerable children through the power of  education.

“We are trying to keep the performance expenses as low as possible so that all proceeds will go to this organization to support and educate children impacted by AIDS, war, and poverty,” says Elizabeth, noting that the City of Menlo Park is once again a co-sponsor. “People may be more willing to pay the $30 ticket price if they know that their money is going to a great cause. I am volunteering my time as are other residents here and in Palo Alto to make this happen.” 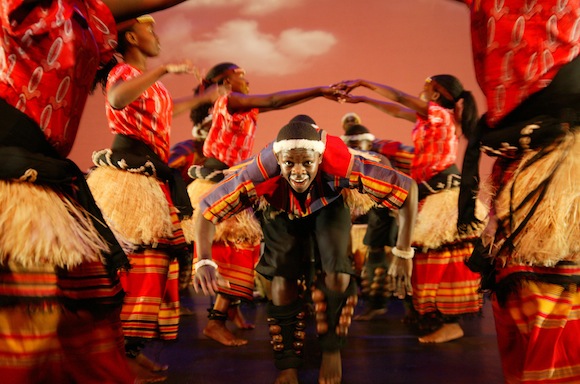 In the two-hour performance, the troupe performs about two dozen different songs and dances. Artistic Director Peter Kasule notes that there are more than 50 distinct ethnic groups in Uganda, and some of what is presented by the troupe is rooted in specific rituals, occasions, and ceremonies while “others capture everyday activities.”

The troupe’s Atherton appearance is part of a 23-city U.S. tour. While in town, the performers will also be visiting Encinal School in Menlo Park and Keys School in Palo Alto. Encinal is using the occasion to schedule a Cultural Arts Day to learn about East Africa.

“We are so thrilled that this amazing group is returning to our community at MAPAC,” says Elizabeth. “This is an amazing show that the whole family can enjoy together.”

Tickets for the Jan. 29 performance, which starts at 6:00 pm, are available online.

Photos of Spirit of Uganda in performance by Dan Ozminkowski