Spotted: 6-foot-tall behemoth weighing 5,100 pounds getting lift off at SLAC, thanks to 7-ton crane! 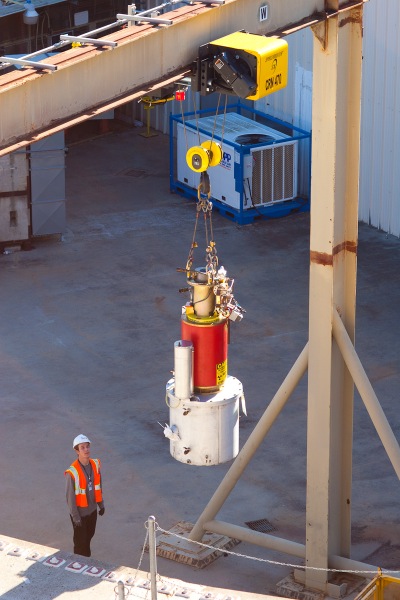 A damaged klystron took a short flight out from the center of the SPEAR3 booster ring at the Stanford Synchrotron Radiation Lightsource last week, courtesy of a new, 7-ton-capacity crane.

A high-voltage connection had failed on the 5045-model klystron, said Dave Ernst, the Mechanical Services group leader with the SPEAR3 Mechanical Systems Group, and it needed to head back to the Test Lab Department, where SLAC’s in-house experts would fix it.

However, as Ernst explained it, “we live in a different world” than SLACers who work on the big linear accelerator. “We live in circles.” And the klystron – a 6-foot-tall behemoth weighing almost 5,100 pounds – was inside the circle of the booster ring, which accelerates electrons to the proper speed before they’re shunted into the SPEAR3 ring.

The klystron would have to be lifted out, and the only way to do that was with a crane, Ernst said.

The controls for the old crane were on top of the booster ring, requiring careful planning, permits (and sometimes shutting down the booster ring) before equipment could be moved in or out. The new crane has a remote control unit a crane operator can hang around his or her neck. When he demonstrated the functions of the remote, Ernst said, his crew “was jumping with joy.”

Ernst gave kudos to the team of fabrication welders and equipment and crane maintenance specialists from Facilities who installed the crane before the winter break. Sounds like they gave Ernst’s crew just what they wanted for Christmas.