Solar energy is focus of SLAC public lecture on Jan. 24 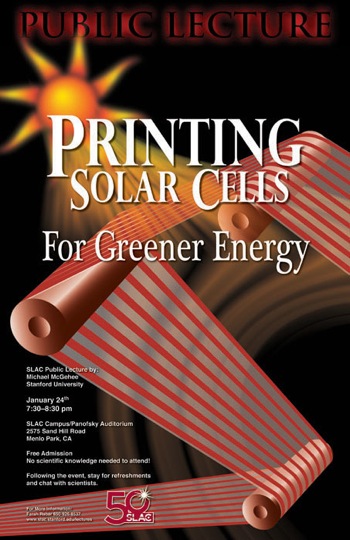 Michael McGehee, associate professor of materials science and engineering at Stanford, will deliver the next SLAC Public Lecture, Printing Solar Cells for Greener Energy, beginning at 7:30 p.m. on Tuesday, Jan. 24.

The lecture’s premise: Finding a way to provide the world’s population with clean energy is a critical issue. Since sunlight is our most abundant source of energy, solar cells, which absorb sunlight and create electricity, will become increasingly important over the next several decades.

There have been great advances recently using silicon and thin films of semiconductors to make solar cells, and solar electricity is just starting to become economically competitive. It is still important, however, to drop the costs further so that it will be possible to utilize even more solar energy.

After providing an overview of the solar cell technologies that are currently commercially available, Professor McGehee will describe a relatively new approach that could make it possible to print solar cells in roll-to-roll coating machines similar to those used to make newspapers. He will show how solar cells can be made with organic semiconductors and explain how these cells work.

SLAC Public Lectures, held in Panofsky Auditorium, are free and last about an hour. Refreshments are served after the lecture, and guests have an opportunity to speak with the presenter. This year’s series commemorates SLAC’s 50th anniversary and will include a series of lectures highlighting the future of discovery that lies ahead for research at the laboratory.