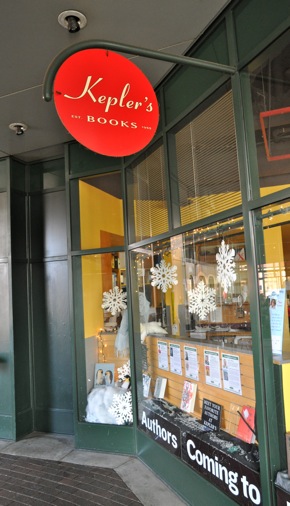 Kepler’s Transition Team, a group of local business and community leaders, today announced the launch of “Kepler’s 2020.”  The project aims to create an innovative hybrid business model that includes a for-profit, community-owned-and-operated bookstore, and a nonprofit organization that will feature on-stage author interviews, lectures by leading intellectuals, educational workshops and other literary and cultural events.

According to the team, by separating the for-profit bookstore from the nonprofit organization, Kepler’s 2020 will allow the bookstore to maximize its profitability while enabling the community to support rich educational and cultural programming through tax-deductible donations and corporate sponsorships. The two organizations, although separate legal entities, will collaborate closely to bring people together around ideas and books to foster intellectual discourse and civic engagement in the community.

Among the innovations being considered for the bookstore are publishing-on-demand capabilities and an e-book friendly in-store browsing experience; concierge services to provide “literary matchmaking” for customers, book swaps and other innovative programs to bring people of all ages together around their shared love of books; and a speaker’s bureau with readership development services for emerging authors.

The transition team has started engaging Kepler’s customers and community members through surveys, interviews, and workshops to gain additional insights about programs and services that will help drive the Kepler’s 2020 project.

“The traditional model of retail book selling appears headed for extinction,” said Praveen Madan. “Now, more than ever, communities need accessible physical spaces where people come together to share their love of stories, ideas and culture. Kepler’s 2020 is a strategic move to reposition a strong community bookstore to embrace industry trends and new technologies, instead of resisting them. Our goal is to make Kepler’s the prototype community bookstore of the future.”

A former management consultant and high-tech executive, Madan became a literary entrepreneur in 2007 when he and his wife and business partner, Christin Evans, acquired and transformed the independent Booksmith bookstore in San Francisco. In 2009 he teamed with Cody’s Books’ long-term events director Melissa Mytinger to launch the Booksmith-affiliated speaker series, Berkeley Arts & Letters.

The Kepler’s 2020 project plans to launch a capital campaign for the nonprofit entity with a goal of raising funds from corporate sponsors, foundations and individual donors. Kepler’s existing Literary Circle Membership program will remain an important source of funding for the bookstore. The 2012 Kepler’s Literary Circle membership campaign will be launched in February and is seeking to raise an additional $100,000 to support ongoing operation of the bookstore.

“A vibrant downtown Menlo Park depends on premiere gathering places that engage the community,” said Menlo Park Mayor Kirsten Keith. “Kepler’s is a treasure that attracts people from the wider Peninsula area to Menlo Park, and the City is delighted with these innovative plans to reinvent Kepler’s as a literary and cultural destination. It is encouraging to see the local community rallying to support the transition to Kepler’s 2020, and I fully support these efforts.”

Transition team members are volunteers and function as an advisory board. In addition to Madan, team members include Gail Slocum, former mayor of Menlo Park; Mitch Slomiak, Kepler’s CFO; Jean Forstner, director of community affairs at Kepler’s; Steve Piersanti, president of Berrett-Koehler Publishers; Beth Morgan, marketing consultant; and Patrick Corman, communications consultant. Clark Kepler, who has served as the bookstore’s CEO since 1981, is retiring on January 31 but will participate in the transformation project in his capacity as Kepler’s board chair and transition team member.