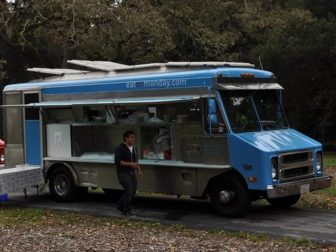 Editor’s note: InMenlo welcomes submissions for its Opinions section about issues affecting our local area. Tell us what’s on your mind in 700 words or less. Please be brief, relevant, informed, respectful, and polite. Please include your name – no anonymous opinions! We review all opinions before they are published and may choose to not publish an opinion if we deem them inappropriate in our sole discretion. Email to opinions@inmenlo.com.

If a goal of the Downtown Specific Plan is to revitalize the Downtown, bringing in food-vending trucks for curb-side service is not the way to accomplish this. San Mateo and San Francisco have both allowed fast-food trucks in their downtown areas.  The results are in:

Again, when food trucks began coming to Downtown San Francisco more than once a week, business plummeted at nearby restaurants, and restaurants began complaining that the truck phenomenon was eating into their businesses and they wanted a fairer playing field.  An editorial in the Chronicle (Dec. 2, 2011) on the growing threat to the restaurant industry explained it this way: “The owners of traditional restaurants that pay rent or property taxes, provide benefits for employees and tend to have a stake in their neighborhoods . . say that food trucks, swarming into their territory and saddled with almost no overhead, are unfair competition.”

In addition to the direct economic hit experienced by the restaurants, the nearby retail and service businesses also suffer multiple impacts.  Not only do they lose a critical asset – easy access and convenient parking for their customers in the plazas occupied by the food trucks, but also the spin-off business that thriving restaurants contribute to a business community.

Studies have shown how restaurants have a “corner-stone” effect in sustaining the economic vibrancy of a downtown business district.  The proposed food trucks would have a double whammy, not just on the impacted restaurants, but also on surrounding retail businesses.  Trucks should not infringe on the trade of established tax-paying businesses by taking up needed parking spaces in public plazas.

The sponsor of our Sunday Farmers Market – the Menlo Park Live Oak Lions Club – has expressed many of these same concerns to our Council and Staff.

We also question how the City of Menlo Park would take care of the resulting food litter and where the City would locate the porta-potties that would be co-located with the contemplated daily Market Place. (The Market Place proposed location is behind Wells Fargo Bank and Trader Joe’s – Chestnut Street to be closed on south side of Santa Cruz Avenue to create a Paseo connecting to the Market Place.)

There is also an environmental cost.  Food trucks contribute issues of air quality.  They generally run continuously on diesel, spewing exhaust into surrounding areas for hours at a time.

While food trucks have a place in business parks, at construction sites, colleges, and areas not served by restaurants, there appear to be enough serious downsides to locating them in Downtown Menlo Park that our Council and Staff should seriously reconsider this idea.

Author Nancy Couperus is a Menlo Park landlord and spokesperson for the Menlo Park Downtown Alliance.