What’s up with the birds at Pond SF2 in Menlo Park? 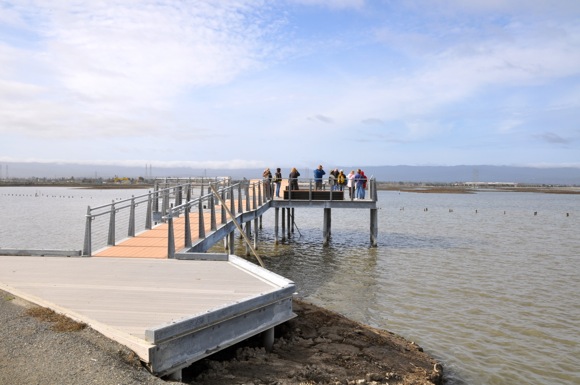 What happens when a former salt pond is restored as a tidal wetland, part of a protected wildlife sanctuary? That and other questions were answered this morning during a walking tour at Pond SF2 in Menlo Park, part of the Don Edwards San Francisco Bay Wildlife Refuge.

In total, the Refuge consists of 30,000 acres of open bay, salt pond, salt marsh, mudflat, and upland and vernal pool habitats. Located along the Pacific Flyway, the Refuge hosts over 280 species of birds each year, including the Ruddy Duck (pictured below).

The Ruddy Duck is a stiff-tailed duck bill that looks a bit like a bathtub rubber ducky. Caitlin Robinson-Nilsen, Waterbird Program Director for the San Francisco Bay Bird Observatory, which organized today’s event, explained that the bills of males turn bright blue during the breeding season.

“The South Bay salt pond is hugely important for the wintering Ruddy Duck,” she said. “Tens of thousands of them are here roughly during the period of November through March.”

Caitlin also talked about the work SFBBO is doing to monitor the Western Snowy Plover (pictured right) at SF2. “Plovers like salt ponds, so the restoration to tidal wetlands is challenging to them,” she said. “Cell three of SF2 is looks more like it looked when it was a salt pond, done with the idea of giving the Plover a nesting and habitat area.

“We added shells in the hope of providing some camouflage for incubating adults and a bit of cover for the chicks. We’ve collected data for three years at Eden Landing, and the first year it seemed to work. But now it appears that the predators are clued in, although we’re still seeing more Plover density.”

The Pacific Coast population of the Western Snowy Plover is federally listed under the Endangered Species Act of 1973 as threatened; it’s also a Bird Species of Special Concern in California.

Caitlin said five Plover nests have been spotted on SF2 islands, which were built using mud from the Bay. “As the mud dries it cracks,” she said. “And that’s proved another challenge, particularly to the chicks. We’re looking at ways to put sediment in the cracks to seal them.”

Also participating in today’s walk was Jane Moss, a docent for the South Bay Salt Pond Restoration Project, which is the largest tidal restoration project on the West Coast. Pond SF2, which covers 240 acres in Menlo Park near the Dumbarton Bridge, was opened in September 2010.

Note about photo below: During our visit to SF2, which was during a high tide, this Great Egret took up residence at a number of drains in the hopes of capturing breakfast. 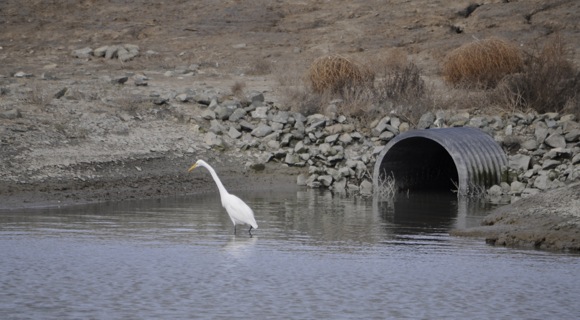