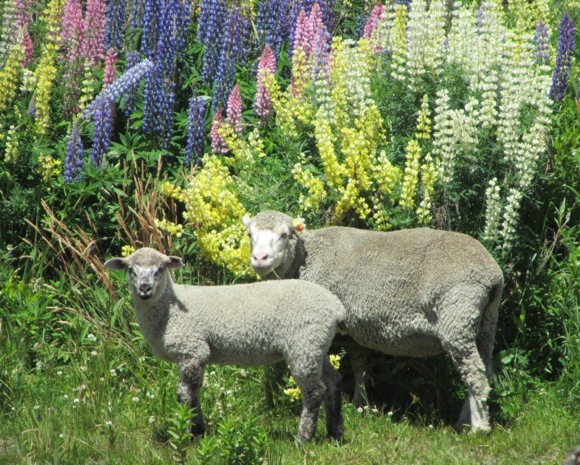 Menlo Park-based photographer Frances Freyberg made a return trip to New Zealand at the end of last year. Her favorite photographs are now on exhibit at Portola Art Galley through March 31.

“Between 2006 and 2011, I’ve gained a lot of experience photographing different places, and I now have a better understanding both of the types of scenes I enjoy shooting, as well as the conditions (weather, time of day, etc.) that tend to produce my favorite photos,” she said. “Today, if there’s a scene that I really like, but the conditions are not ideal, I will try to return another day or time (sometimes multiple times) to try to get the photo I want.” 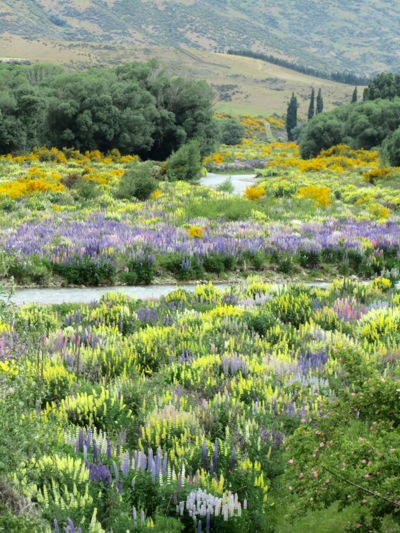 Frances got the opportunity to shoot the same scene twice on her most recent trip with different results. She and her husband were driving on the Crown Range Road between Wanaka and Queenstown in the early evening on the way south to Fiordland National Park. On the way, they spotted a field of lupine growing along the Cardrona River.

She recalled: “We pulled over onto the shoulder so I could take photos, but the sky was quite grey and the sun was already low. So, we didn’t stay for long, although I got a few shots (photo right). When we returned to Queenstown a few days later, I went back to try to find the same place we had stopped previously.”

“I wasn’t able to find exactly where we’d been, but I discovered something even better — a public trail hidden from the road, which led right to the river’s edge. As I walked along the river photographing the lupine, I spotted a small group of sheep with their lambs and crept closer to try to get a picture. I really wanted to get a good photo of sheep on this trip, because sheep are everywhere in New Zealand (as of a few years ago, the sheep to person ratio was about 10:1). Sheep seem to be rather shy creatures, but this pair paused to look directly at me (and my camera) before hurrying away.”

In addition to the photographs on display at Portola Art Gallery, which is located at the Allied Arts Guild in Menlo Park,  there are also be a variety of photo cards from additional New Zealand locations including the fiords and waterfalls of Southland, the historic architecture of the Bay of Plenty, and the glaciers of the West Coast as well as Frances’ latest book, Aotearoa – A Photographic Journey of New Zealand.

“This is my fourth photography book, but my first focusing on only one country,” said Frances. “The photos are organized by region from South to North. I first thought I’d select evenly from
across the country, but in the end, I simply chose my favorite photos, regardless of location, and the book ended up with more photos of the South Island. I wish that I had photos to share from all the regions of New Zealand, but there’s still a lot of the country that I haven’t seen — a good reason to return!”