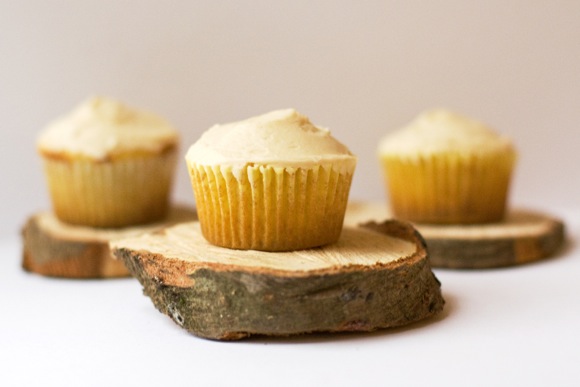 Editor’s note: Rachel Candelaria has long had an interest in food and photography, showcased on her blog, Not Just Sweets, which she describes “as a chronicle of my culinary adventures in the kitchen”. She’s given InMenlo permission to highlight some of her musings and photos from time to time.

I love that pretty much all holidays are an excuse to bake, including St. Patrick’s Day. Since I just made some Guinness chocolate sauce (which, by the way, makes the best hot chocolate ever), I decided to  bake something sweet with Baileys Irish Cream this week. While I opted for vanilla cupcakes, the Baileys frosting would be a great filling with a chocolate cake topped with chocolate ganache, too.

Just for fun, I used a tip I found on my newest addiction, Pinterest, and only filled the cupcake liners 2/3 full (instead of the usual 3/4 full) and preheated the oven to 350 degrees then lowered the oven to 325 degrees just before putting the cupcakes in the oven. As promised, the cupcakes did bake up higher than they usually do.

Vanilla Cupcakes
Yield: About 15 cupcakes (12 if you fill the liners 3/4 full)

Preheat oven to 350 degrees and line muffin pan(s) with paper liners; set aside.

Scrape the seeds out of 1/2 vanilla bean into the milk and set aside.

In the bowl of a stand mixer fitted with a paddle attachment, beat the butter and sugar on medium speed until smooth, about 3 minutes. Add the eggs one at a time, mixing well after each addition.

In a medium bowl, sift the two flours together.

At low speed, beat in the flour mixture in three additions, alternating with milk in two additions.

Fill the cupcake liners 2/3 full and reduce the oven temperature to 325 degrees. Bake for about 22 minutes, or until a tester inserted into the center comes out clean.

Remove from oven and let stand in pan for about 10 minutes before removing cupcakes and placing them on rack to cool completely before frosting.