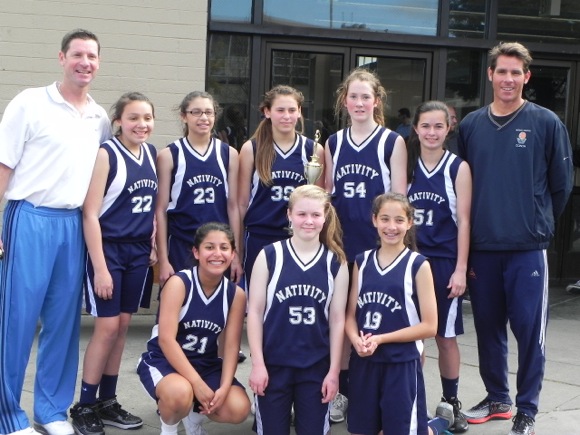 Nativity School’s Varsity girls’ basketball team has not only won the Peninsula Parishes/ Schools League (PPSL) championship, but they made PPSL history as the first team to be comprised entirely of 7th graders to ever do so.

The Nativity Varsity Panthers played the 8th grade St. Roberts’ Varsity for the PPSL top title in what would be the most competitive game of the season. Tied 40-40 at the end of regulation play, the game went into overtime where the Panthers emerged with a 44 – 40 OT win to capture their second consecutive league championship.

Head Coach Kevin Holland remarked on the victory and the season, saying, “When I first met this group of girls — last year when they were in 6th grade — I knew they were a special group. Although there was some apprehension about playing in the varsity division, we went for it.  It was evident, right off, that we could compete. The proof was in an undefeated season.”

Nativity School, located in Menlo Park,  is a K-8 coeducational school that serves approximately 300 students and with a full-time faculty and staff.