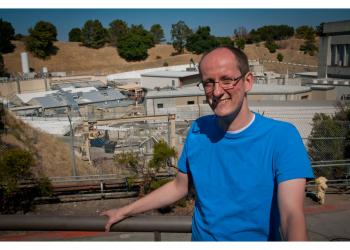 Stefan Mannsfeld, physicist at the Stanford Synchrotron Radiation Lightsource, will deliver the March 27 SLAC Public Lecture, “Engineering Human Touch.” His talk, beginning at 7:30 pm in Panofsky Auditorium, will outline his work in the development of a touch-sensitive “electronic skin” that may help researchers in developing artificial intelligence and natural interfaces between humans and machines.

Winner of the 2011 Spicer Award for his work at SSRL, Mannsfeld will describe a novel approach for making thin, flexible plastic pressure sensors with unprecedented sensitivity and responsiveness. A thin, micro-structured layer of a rubber-like material allows the sensors to distinguish between varying amounts of pressure. He will show how the sensors are fabricated and how they work, and the prospect they give for creating an artificial sense of touch.

SLAC Public Lectures are free and last about an hour. Refreshments are served after the lecture, and guests have an opportunity then to speak with the presenter. This year’s series commemorates SLAC’s 50th anniversary and will include a suite of lectures highlighting the future of discovery that lies ahead for research at the laboratory.