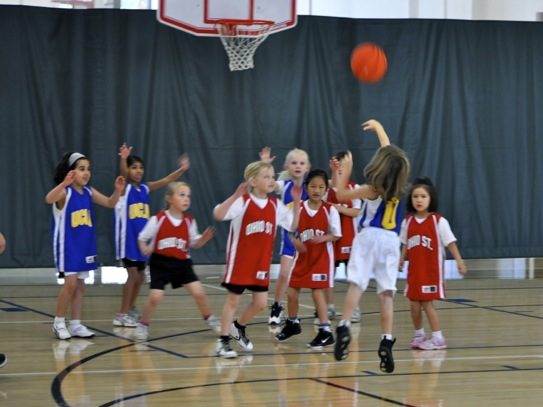 If you thought all of March Madness was taking place in areas other than locally, think again. The inaugural K-2nd Grade Basketball League, offered by HI-FIVE Bay Area Sport Clubs through the Menlo Park Recreation Department, concluded today with championship games played at the Arrillaga Family Gymnasim. The League attracted 160 kids who played on 16 teams. The program was organized in a modified version of NCAA pre-season, season, and tournament play.

We stopped by just after noon when two K/1st grade finals were being held: Wake Forest versus Texas in the Legends division and UCLA versus Ohio State in the Leaders division. (For the younger kids, the main court is divided into two, so two games are played at the same time.) Texas won 34-26; Ohio State beat ULCA 13-10.

The second grade championship game was set to start at 3:00 with Stanford facing Cal. A face painter and DJ were on hand to add to the festivities.