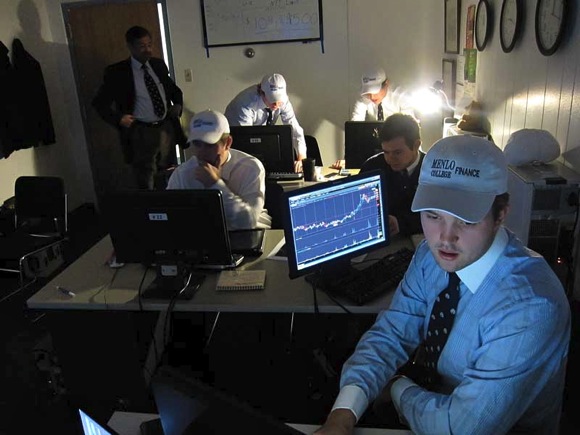 A team of five students in the Menlo College Investment Club traded gold and oil futures in a fast-paced electronic trading competition for a month on a professional platform to climb their way to 4th place in the nation in the Chicago Mercantile Exchange’s 2012 Commodity Trading Competition.

Students Michael Brown, Eric Dawson, Marc LeBoeuf (pictured foreground), Cameron Showecker, and Steven Schaub competed against 164 teams from the top colleges and universities in the nation, for the title of this year’s best commodities trading school. The placement was particularly remarkable for Menlo College, a small college with only 642 students.

Menlo placed in the top four of the Trading Challenge, garnering them a trip to Chicago and a prize for their efforts. The top four teams included:
1. University of Chicago
2. Chicago State University
3. Princeton University
4. Menlo College

While in Chicago picking up their team award, two of the students competed individually in the 2012 Open Outcry Trading Challenge. Michael P. Brown placed 4th and Mark LeBoeuf was a runner up.