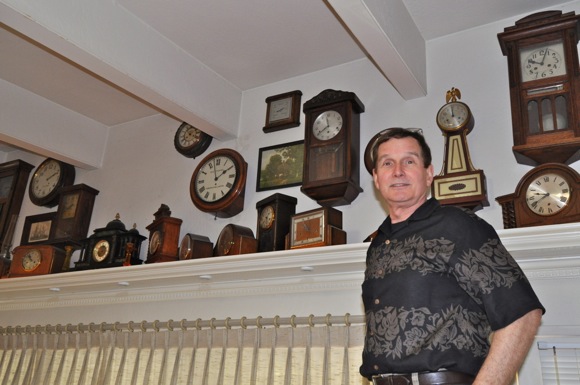 Given Gordy Gourdin’s love of flying and his description of himself as a “tinker junky,” you’d think his Atherton home might be lined with model airplanes. Instead, a visitor is greeted by a wall of old clocks, just part of a collection that also resides in a second home in Oregon and his sister’s home in Southern California.

There is, however, a connection of sorts between flying and the clocks. The Menlo-Atherton High School grad, who moved to the Atherton home his grandfather built in 1952, graduated from San Jose State with an aeronautical degree. While in high school he’d gotten his general aviation license.

Following college, he spent six years with the Navy as a squadron commander in Pensacola, Florida, training troops headed for Vietnam to fly helicopters. “I joined the Navy because I really wanted to fly jets,” he said. “Instead, I spent a whole lot of time in a Huey.”

The time in the Navy led to a career in field service at Lockheed selling C130 Hercules military transport aircraft — and his interest in pendulum clocks. “I spent over half my time with Lockheed overseas and in Antarctica, which involved lengthy stays in Christ Church, NZ, the stepping stone to Antarctica,” he said. “I made friends there, some of whom owned antique shops.”

“Because I was in field service, I was allowed a big box, much bigger than what I needed. So, I started buying old clocks that I could fix and shipping them back to the States. Clocks were something to tinker with. The locals didn’t value them as antiques, just as obsolete. Almost all the clocks were inoperative when I bought them but most needed just a good cleaning to start running again.”

Today, Gordy estimates he owns about 200 clocks, most of which were made in the last part of the 19th century and early part of the 20th century. “The common link among them is that they all feature pendulum regulated movement, which was invented by Christian Huygens in the mid-1600s,” he said. “Some of the clocks in the collection were really expensive when new — clocks were a luxury in England, for example — and some were dirt cheap because they were mass-produced in the United States.”

Gordy says that he can remember where he got every one of his clocks, partly as a result of shopping around and the time it took him to decide whether or not to buy it.

“Clock collectors are a nutty bunch,” he said with a smile. But we should add, not nutty enough to to have all the clocks in the house running, which would not only take a lot of upkeep but would be “way too noisy.”