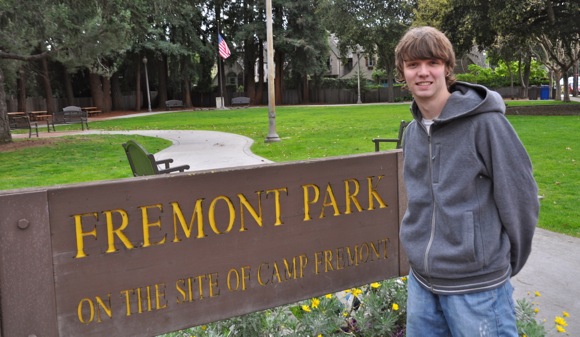 Bryce Cronkite-Ratcliff was in 7th grade when a volunteer opportunity at the Menlo Park VA, where his mom worked, turned him into a young version of Ken Burns.

“I think they were celebrating the 75th anniversary and someone came up with the idea making a video documentary of Camp Fremont,” said the Woodside resident, who is now a junior at Stanford. “I was a big fan of Ken Burns and thought, ‘why not.’

Bryce soon found out that not only did most locals not know about Camp Fremont, which brought over 40,000 troops to the tranquil town of 2,000 during World War I, but that there was very little available information about what the Army’s basic training facility.

The VA itself had one pamphlet about the encampment, which had been published by a bank. “I remember it was a really big deal to return it as it was the only remaining copy.”

In creating the video documentary, Bryce received the most help from Frank Helfrich of the Menlo Park Historical Association. “He was great, giving me access to all the files and letting me scan the photos, which was key,” said Bryce. “There was this huge scrapbook put together by a woman whose name, I think, was Hazel Razor. I think she may have been a nurse. It was fascinating to look through it, although I wasn’t able to weave her story into the video.”

Bryce finished the video when he was in eighth grade. In the years since, he’s found himself sought out as a Camp Fremont expert. “I’m sure there are a lot of people with greater expertise, but I guess I’m just more public given that the video is on YouTube,” he said.

Bryce, who’s majoring in computer science, says he hasn’t done any film making since make the Camp Fremont documentary, but he’d like to do something in collaboration with his brother. “That first effort was really a family affair,” he said. “I did the main narration but my Dad did the voice of Woodrow Wilson and friends and neighbors contributed as well.

“Putting together the video was really a fun project. I don’t think I’m going to be the next Ken Burns, but I hope it does serve the purpose of letting people know about Camp Fremont and it’s place in the history of Menlo Park.”