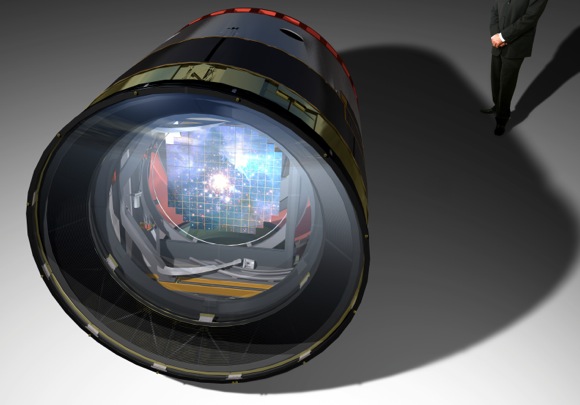 A 3.2 billion-pixel digital camera designed by SLAC National Accelerator Laboratory in Menlo Park is now one step closer to reality. The Large Synoptic Survey Telescope camera, which will capture the widest, fastest and deepest view of the night sky ever observed, has received “Critical Decision 1” approval by the U.S. Department of Energy (DOE) to move into the next stage of the project.

The Large Synoptic Survey Telescope (LSST) will survey the entire visible sky every week, creating an unprecedented public archive of data — about 6 million gigabytes per year, the equivalent of shooting roughly 800,000 images with a regular eight-megapixel digital camera every night, but of much higher quality and scientific value. Its deep and frequent cosmic vistas will help answer critical questions about the nature of dark energy and dark matter and aid studies of near-Earth asteroids, Kuiper belt objects, the structure of our galaxy and many other areas of astronomy and fundamental physics.

“With 189 sensors and over 3 tons of components that have to be packed into an extremely tight space, you can imagine this is a very complex instrument,” said Nadine Kurita, the project manager for the LSST camera at SLAC. “But given the enormous challenges required to provide such a comprehensive view of the universe, it’s been an incredible opportunity to design something so unique.”

Now that the LSST camera has passed Critical Decision 1, the project begins a detailed engineering design, schedule, and budget phase. While the DOE funds the design and construction of the camera, the full cost and logistics of the new telescope are being shared by the DOE and the National Science Foundation, as well as a large partnership of public and private organizations in the United States and abroad.

If all continues as planned, construction on the telescope will begin in 2014.

Image courtesy of the LSST Corporation