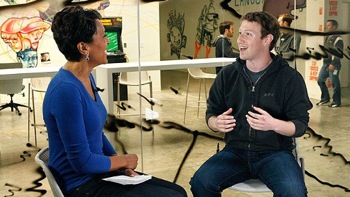 Update on May 1: Facebook announced that “organ donation status” was being added to Timeline. Here’s how.

In exclusive interviews, Facebook founder Mark Zuckerberg and COO Sheryl Sandberg will reveal a new tool for the social networking site to ABC News’ Robin Roberts and Diane Sawyer on Tuesday, May 1. First on Good Morning America, Zuckerberg, speaking from the company’s Menlo Park headquarters, gives Roberts the first look at a new Facebook tool which the social networking site says “has the power to save lives.” Then on World News with Diane Sawyer,  Sandberg will sit down for an interview with Sawyer and discuss the personal stories that led to this new initiative and its goals.