SLAC Colloquium examines Wikipedia’s protest of SOPA, PIPA on May 7 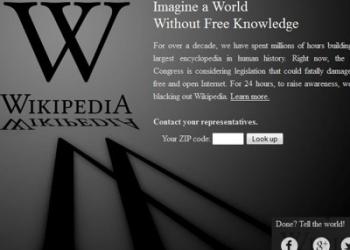 On Jan. 18, many websites went dark as part of a mass protest against two proposed bills, the Stop Online Piracy Act (SOPA), and the Protect IP Act (PIPA). In a talk — “The Roots and Execution of Wikipedia’s Anti-SOPA Blackout” — scheduled for Monday, May 7, one of the first specialists in Internet law will discuss how one well-known site protested the bills.

According to Mike Godwin, one-time General Counsel of the Wikimedia Foundation, both SOPA and PIPA proposed to target “rogue websites dedicated to infringing or counterfeit goods.” But many Internet experts felt the bills went too far — they would “break the Internet” and have a chilling effect on the sharing of legitimate content.

Proponents withdrew the bills after the protest, in which some sites (for example, Wikipedia, Reddit and Boing Boing) were effectively offline — a symbolic gesture suggesting that these sites would be forced offline permanently if the laws were adopted.

While these specific bills were withdrawn, Godwin will discuss how similar bills are expected to be introduced by members of Congress, this time with more input from Internet experts. Godwin was first counsel for the Electronic Frontier Foundation (EFF) and, from 2007 through 2010, general counsel for the Wikimedia Foundation.

Godwin’s talk on May 7 begins at 4:15 p.m. in SLAC’s Panofsky Auditorium, with refreshments served beforehand at 3:45 p.m. SLAC colloquia are intended for a general audience and are free and open to the public.