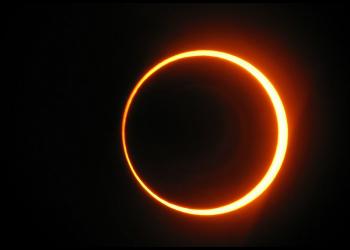 During an annular eclipse of the sun, such as the one occurring May 20 over much of the western United States, the moon passes between the Earth and the sun. But because the moon is near its farthest distance from Earth, it appears a tiny bit smaller in the sky and doesn’t completely cover the face of the sun.

Instead, viewers in the eclipse path see the moon’s silhouette surrounded by a glowing ring of sunlight — the ring of fire (annulus is Latin for ring). As with total eclipses, viewers outside the path of annularity — the annular eclipse equivalent of the path of totality — see a partial eclipse, in which a portion of the moon’s shadow appears to skate across a segment of the sun’s surface.

A map of the path of Sunday’s annular eclipse across California shows that we’re not on it. But there are good viewing spots within a few hours’ drive of Menlo Park.

Don’t think that just because most of the sun’s disk is hidden an annular eclipse is safe to look at. That ring of fire is still bright enough to burn your eyes. If you want to view it, do it safely!

Upcoming eclipses to watch for:

Editor’s note: Locally, there will be a partial solar eclipse starting around 5:15 pm on Sunday with peak viewing times between 6:15 and 6:45 pm. The closest places to view it using safe solar telescopes are the San Carlos Library (610 Elm St.) and the Foothill College Observatory (12345 El Monte Rd., Los Altos).