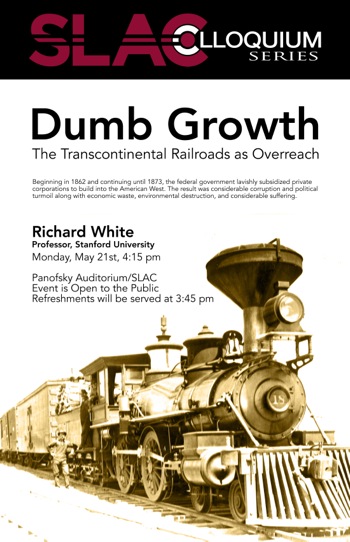 Richard White, the Margaret Byrne Professor of American History at Stanford, will deliver the May 21 SLAC Colloquium. His talk, “Dumb Growth:  The Transcontinental Railroads as Overreach,” begins at 4:15 p.m. in Panofsky Auditorium, with refreshments served at 3:45 p.m.

“Beginning in 1862 and continuing until 1873, the federal government lavishly subsidized private corporations to build into the American West,” White said. “The result was considerable corruption and political turmoil along with economic waste, environmental destruction and much suffering. But the people who created that crisis did not suffer from it, which is one of several parallels I will make to economic events in the 21st century.”

In his latest book, Railroaded, which was a finalist for this year’s Pulitzer Prize in History, White describes how a cabal of often incompetent capitalists managed to make huge fortunes building and operating the nation’s first transcontinental railroads – even though they consistently lost money and often went bankrupt.

“Having built ahead of demand,” White wrote in the book’s final chapter, “the railroads had to create traffic in places where there was precious little to sell. Given their high fixed costs, the railroads could not simply wait for profitable traffic to appear. Hauling something, even at a loss, was better than hauling nothing. In attempting to cut economic losses, the railroads helped create both what might be called dumb growth and environmental catastrophes.”

Foremost among these railroad moguls was Leland Stanford, president of the Central Pacific Railroad and later, with his wife, founder of Stanford University.

White has taught at Stanford since 1998. His areas of expertise include corruption in the Gilded Age (late 1860s to 1896), dependency and social change among Native Americans, and the history of the environment, including railroads, rivers and lakes.