Shakespeare High screens at MAPAC on May 22 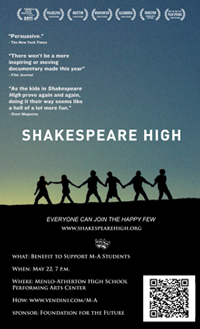 Shakespeare High will screen on Tuesday, May 22,  at 7:00 pm, at the Menlo-Atherton High School Performing Art Center. The feature-length documentary is about a determined group of teens whose immersion in the Drama Teachers Association of Southern California’s high school drama program compels them to overcome their difficulties and create better lives for themselves. Among the many famous alumni/ae of this almost 100 year-old program are Kevin Spacey, Val Kilmer, Mare Winningham, and Richard Dreyfuss, all featured in the movie.The film has received rave reviews at important film festivals across the country this year, including the recent honor of Best Documentary at the Sonoma Film Festival.The screening is sponsored by the M-A Foundation for the Future and proceeds benefit programs and services for M-A students. You can buy tickets online.
Category: