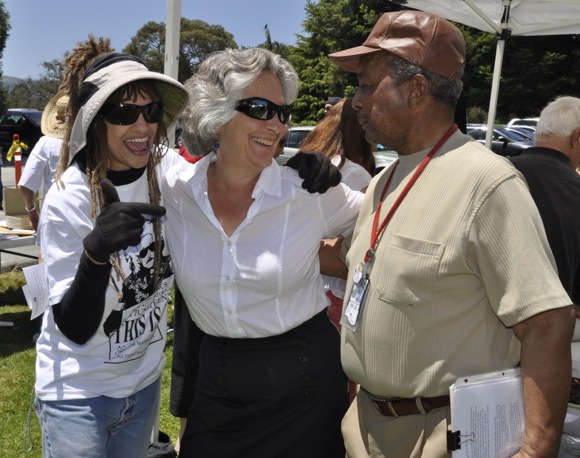 A little bit of civil rights history visited the SLAC campus in Menlo Park on Friday. The celebration of the tradition known as Juneteenth featured music by Rockin’ Rick Baker and the New Millennium Band and a ribs and chicken lunch, all in commemoration of two days in 1865 when Federal troops forced slave owners in Texas to comply with the Emancipation Proclamation. Today, it’s used as an occasion for African-Americans to present their history, food, and culture to a wider audience.

A group of SLAC employees that included Al Baker, who is still on the planning committee, started holding Juneteenth festivities in 1989. (Baker is pictured top with committee member Michele Smith and SLAC Director Persis Drell and bottom with jazz singer Jamie Davis, a former SLAC employee.) 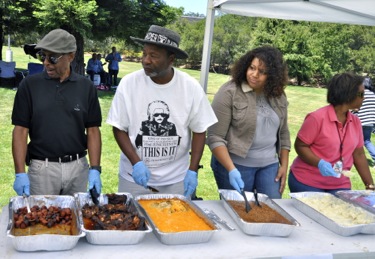 “We’re trying to keep it going but this may be the last,” said Wanda Elliot, who coordinated the event this year, which featured t-shirts with Michael Jackson’s body with Albert Einstein’s head photoshopped to replace the singer’s. The headline reads “This Is It.”

“We’ve had a lot of firsts,” she continued, “including the first African-American president and the first female director of SLAC.”

Drell is leaving SLAC this summer when her replacement is found, so “This Is It” for her, too.

For committee member Michele Smith, it’s all about Michael Jackson. She’d brought a collection of King of Pop-style jackets and the CD This Is It to share with her co-workers. “I saw the Jackson Five at the Cow Palace in 1970 or ’71 and have been a huge Michael fan ever since,” she said.

Jamie Davis stopped by to catch up with his former colleagues, the first time he’d touch-based for many years. “I’ve been gone for 10 years and on the road at lot,” said the Bay Area-based jazz singer known for his baritone voice. “It’s good to be back.” 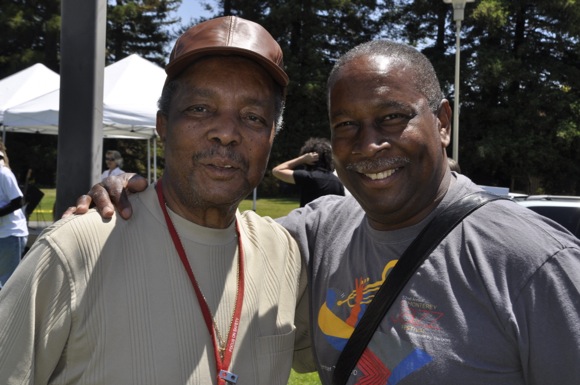