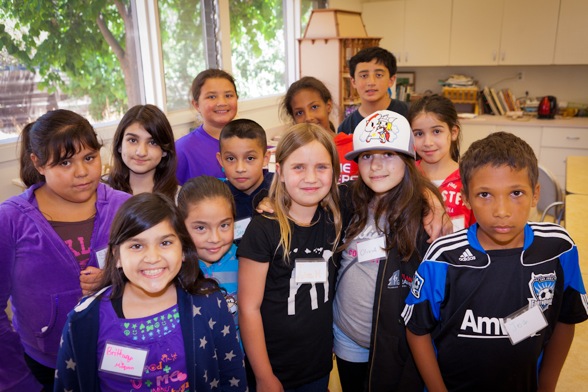 The sounds emanating from one of the craft rooms at the Peninsula Volunters‘ Little House on Monday morning were high-pitched giggles and staccato chatter. They were coming not from the usual group of people associated with the long-time Menlo Park senior center but instead from children age 9-12, who are participating in the second of two children’s camps taking place there this summer.

Held in conjunction with the San Mateo County Sheriff’s Activities League, the Bloomsbury Children’s Camp adheres to the six principles that Little House actively promotes throughout all of its programs and services: physical fitness, nutrition, socialization, mental stimulation, sense of purpose and friendship. Over the course of the two-week, day-camp program, the children are learning about four different disciplines: watercolor, gardening, digital photography, and lapidary .

The local camp takes as its model The Bloomsbury Group, a collection of influential English intellects and literary figures, which included Virginia Woolf and E.M. Forster amongst its ranks. Little House organizers put it together following an increased demand for its Ceramics Camp, held earlier this summer.

“We’re hoping that the camps serve as a model for future afternoon children’s programs at Little House that cover a variety of topics,” said Little House Program Manager Julie Scales.