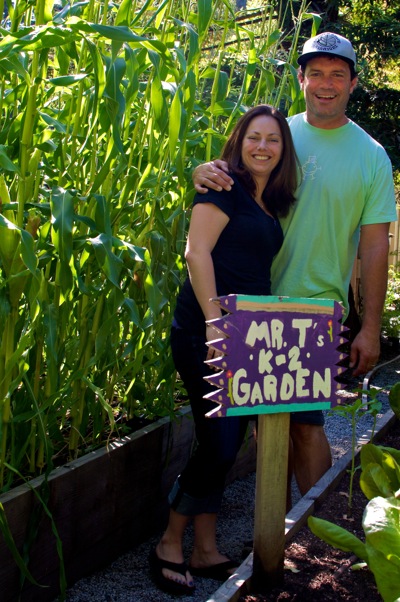 Jeff Thomas, co-owner of Little Man School House, a young 5s, pre-kindergarten located in Atherton, is not in the least bit small. “The Little Man is a doodle I’ve done since I was a kid,” he explains. “Guess you could say I’ve dragged it along with me in life.”

That life included a 15-year stint teaching in a K-2 multiage classroom in the Redwood City School District, where he was instrumental in putting a music-based curriculum together. With budgetary cutbacks looming, Jeff took a leave of absence and started tutoring. He named the business Little Man Literacy, and when he and his wife Rachael decided to open their own school, the name stuck.

“I still wonder about the name,” he says. “In our first year, we had more girls than boys, so it has nothing to do with gender. Once people are familiar with what we’re offering, they don’t think about the name. But, I’m not sure about it for others.” 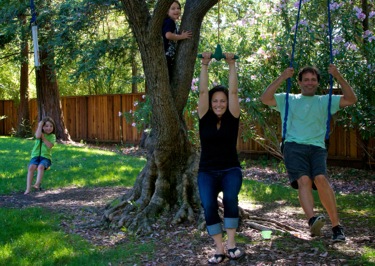 Before getting his teaching credential, Jeff  — known to his students at Mr. T — was a nanny for a couple of years in Menlo Park. Wife Rachael’s roots are more athletic. She played soccer at Cal and figured that some day she would coach.

“I met Jeff and did my masters at Cal in athletics and education,” she says. “I fell into a teaching position at Jeff’s school. By then we were married, and I was pregnant with twins. A few years later, I was pregnant again. Then, we found this house online and started the school. It all sort of fell together.”

Adds Jeff: “I really feel I was meant to teach young children to read and write and to be good people. Rachael really inspired me to keep going. It’s been quite an adventure.”

Both Rachael and Jeff are advocates of play — and letting kids be kids. “Wherever the kids go when they’ve finished their year with us, we want them to have a love of learning,” says Jeff. “And most of all, we want them to have some fun and slow down a bit from the busy pace of the mid-Peninsula.”

Little Man School House has a few openings for the 2012-13 school year and offers tours of the campus for interested parents.