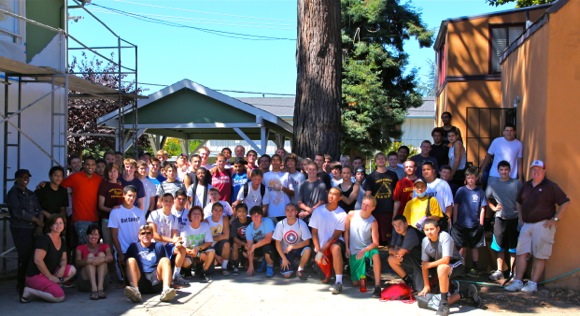 Over 80 members of the Menlo-Atherton High School Bears football team and their parents and coaches were in full force last Saturday (8/11)  in East Palo Alto as part of their annual Community Service Work Day. 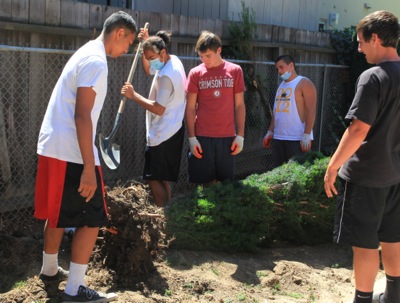 The  Community Service Day was set in motion in collaboration with the Music & Arts Project (MMAP), the East Palo Alto Police Department, Police Activities League (PAL), and Home Depot, which provided supplies. The  M-A Bears were organized in four “strike teams”, three of which set out in vans driven to previously identified areas in East Palo Alto in high need of graffiti removal, landscape clean up and trash removal.

Olatunde Sobomehin, Deputy Director of MMAP, led the fourth group of players and parents at the MMAP campus site on Euclid Avenue where 40-plus Bears painted, cleaned and landscaped.  East Palo Alto Mayor Laura Martinez and former M-A football father and EPAL coordinator Larry Moody came out to lead, inspire, and thank the Bears for their time and efforts off the football field and to recognize their strong sense of community.

Football coach Sione Taufoou, who led his 2011 Bears to the CCS Championship game summed it up: “We are grateful for the opportunity to give back to our community and allow our players to experience something so positive.  M-A football is about building character and developing our young men into our future community leaders.”