Dumbarton Bridge will be closed over Labor Day weekend 2012 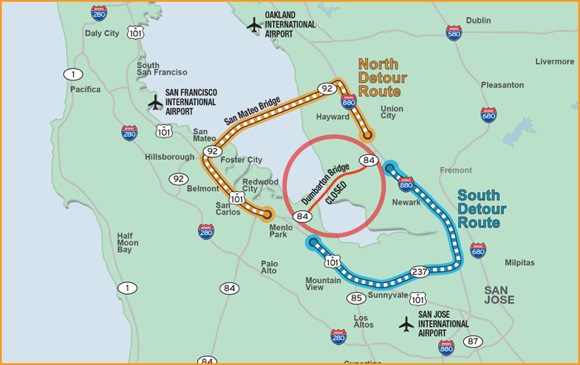 The entire Dumbarton Bridge will be closed during Labor Day weekend 2012 to complete another major element of the seismic retrofit project. Over the three-day closure, Caltrans will replace the expansion joint on the eastern side of the bridge across all six lanes of traffic. During the closure, motorists are encouraged to take public transit or alternate driving routes. Motorists should allow extra time for travel and use other bridges, including Highway 237 and Hwy 92 via the San Mateo Bridge.

For the past few months, nightly lane closures have allowed crews to access inside and underneath the bridge deck to complete work while traffic continues to flow overhead. The first full closure of the bridge occurred over Memorial Day weekend 2012, when crews replaced the western expansion joint. Pre-closure activities for the upcoming closure will continue until Labor Day weekend 2012.

The Dumbarton Bridge is 1.6 miles long and connects the cities of Menlo Park (San Mateo County) and Fremont (Alameda County), Calif. The bridge serves approximately 61,000 vehicles per day and has three lanes of traffic in each direction. The five main components of the bridge include: A Main Channel crossing at the middle of the bridge, an Approach Structure at each end of the main crossing, and a Trestle Structure at the end of each Approach Structure. The existing structure opened in 1982, replacing the 1927 Dumbarton Bridge.