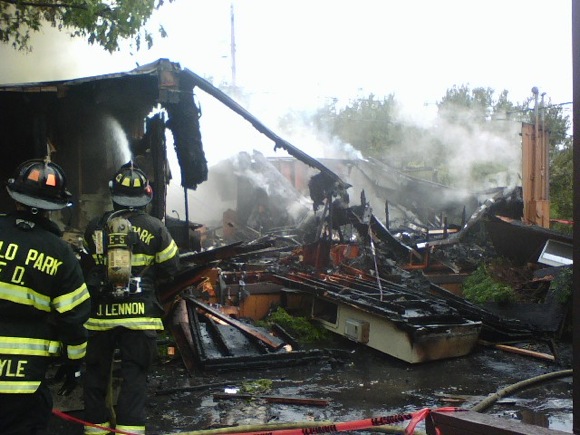 The school fire was reported at 3:50 am the morning of the 13th. The caller reported smoke and fire visible from the school but mistakenly gave the location at Chilco Street and Constitution Avenue, which is located a quarter mile away. The error resulted in a three-to-four minute delay in response  time, but firefighters quickly altered course and arrived on-scene at 3:55 am.

Additional time was necessary to access the gated campus and locked building, which also had window bars. The crew from Menlo Engine 77 gained access to the administrative modular building and were met with thick, heavy black smoke from floor to ceiling as they attempted to find the fire in the modular office. The crew from Menlo Truck 1 was sent to the roof of the building to ventilate the structure and raise the smoke layer by cutting a hole in the ceiling. The Truck Crew radioed the Battalion Commander that the roof felt spongey as another engine crew from Redwood City communicated that the walls of the building were starting to bow outward.

Battalion Chief Jim Stevens ordered all fire personnel out of, off of, and away from the structure, declaring a defensive fire attack operation where fire fighters stay safely outside of the structure and shoot water into it to suppress the fire, due to the risk of catastrophic structural failure. Shortly after all fire crews had moved clear of the structure, the roof of the building collapsed.

The collapsed roof created fire suppression challenges as it compartmentalized the structure. The fire was still burning by 10:00 am despite thousands of gallons of water which were being applied from an elevated aerial ladder water tower. The condition also prevented fire investigators from entering the structure.

Using its connections from the Districts’ Urban Search and Rescue Team, a special military forklift and private excavator was re-routed from highway 101 and Embarcadero in Palo Alto on it’s way to another job. They were sent to the site so the structure could be dismantled, firefighters could extinguish the stubborn fire, investigators could find the cause and origin, and school administrators could begin to search for salvageable items in the rubble. 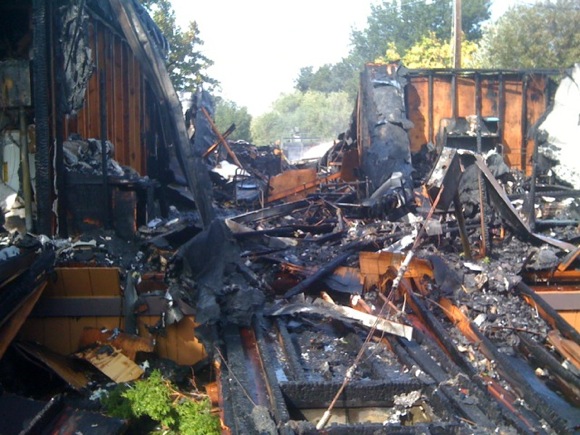 By noon the structure was almost completely dismantled, the fire was out, and investigators had keyed in on the teachers lounge kitchen area which had been spared from the demolition. Fire Investigators believe a pinched electrical cord to the stove in the kitchen was the source of the fire when it shorted out. Damage is estimated at $100,000 in content damage and $300,000 in structural damage.

Firefighters assisted school staff with overhaul and salvage operations until 6:00 pm. Several lap top computers, a power point projector, and filing cabinets full of student information were eventually located along with other items.

The school was insured but all of the damage and items may not be able to be replaced, and the school is accepting donations. The school was not equipped with a monitored fire alarm system or sprinkler system which would have been required in newer fixed structures.

“This is the second modular school building fire we have had in Menlo Park in the last year,” stated Fire Chief Harold Schapelhouman. “These trailed-in structures were intended to be temporary but often may be in place for decades and are allotted exemptions under the fire code since they are not considered permanent.” The Beechwood structures had been in place since 1986.