Can anyone claim to be more Menlo-Atherton High School than Jim MacKenzie? He’s a graduate, as is his wife, Janet, and his four brothers. His two children are grads. He taught at the school for 25 years. And, he’s now active with the Alumni Association, which is planning an all-class picnic on Oct. 13 to celebrate the school’s 60th anniversary. (To get more information, contact Bob Beckstrom: mabears1960@yahoo.com.)

“I’m one of those people who thinks that fate intervened and allowed me the opportunity to return to M-A, which was the ideal situation for me in so many ways,” said Jim, who taught at San Carlos High School for 13 years before taking his teaching talents to his alma mater. “I got to be at one of the most diverse high schools in the country among great colleagues and teach subjects that I really wanted to teach.”

When Jim returned in 1982, the campus was physically not in great shape, in sharp contrast from how it looked during what he called “M-A’s Golden Era,” the 60s. “And of course, it’s gone through a tremendous transformation over the past decade, what with the Performing Arts Center and other new buildings.”

During the Alumni Association’s early years, an important set of icons disappeared from campus — the brass numbers of class years that graced a set of columns in front of the administrative building.

“Eric Hartwig, whose tenure (about 10 years) was the longest in school history, had a vision of making the school entry area more open,” recalls Jim.

“A lot of people were upset when the numbers came down, because they felt that they were a tradition worth preserving. The Alumni Association mounted a crusade to get them back. The wall where they are now displayed near the Performing Arts Center was designed so that there can eventually be two long rows of class years — enough for a very long time.” 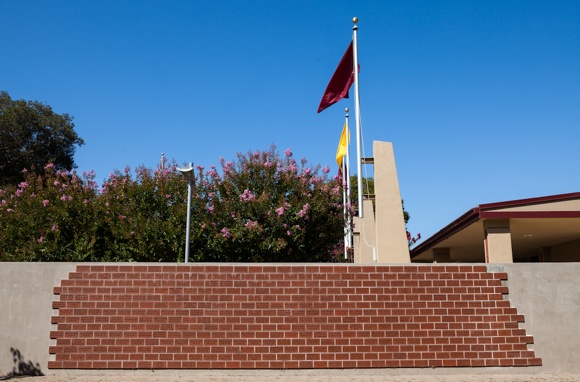 Another Alumni Association project is selling bricks that are dedicated to teachers, students, teams, etc. “When the PAC was designed, an Alumni Courtyard was incorporated with the brass class years on one side and the bricks on the other. Proceeds from brick sales have paid for things like indoor materials for the PAC. We also give out at least one college scholarship a year.

“I really believe M-A gives a segment of the student body a real opportunity for quality education that they wouldn’t necessarily have access to. It’s the kind of school that can really make a difference in a kid’s life.”

For Jim, the difference maker during his student years was his water polo/swimming coach Bob Gaughran. “[He] was not only my mentor, but a dear friend as well,” Jim wrote when he retired from teaching. “He gave greater focus to my life. Bob wrote my recommendations, took me on college tours, set me up with ‘acceptable dates,’ and ultimately convinced me to attend his college alma mater [University of the Pacific]. His influence was second only to that of my wonderful parents.”

The hours of the all-class picnic are from noon to 4:00 pm. There will be food, drinks, music, and tours of the campus and its many new buildings. All M-A grads and family, as well as the members of the surrounding community, are welcome at this free event.